After only one victory in their last five Bundesliga games, Wolfsburg are set to host the Bavarian heavyweights, Bayern Munich, at the Volkswagen Arena, hoping to avoid defeat in order to stay away from the relegation zone. The Wolves failed to win in each of their last three home races, conceding five goals in the process. On the other hand, the Reds are unstoppable in 2018, as they have won six matches in a row, bagging 22 goals in total.

Jupp Heynckes’ team is marching towards another Bundesliga title, which is going to be their sixth in as many seasons, and they could take their foot off the pedal, as they have commitments in the Champions League next Tuesday against Besiktas. Bayern have the best defense in the league, with only seventeen goals conceded so far, while Wolfsburg are experiencing immense difficulties in the attack, having scored just 25 times in 22 games this campaign.

With the injuries of Ignacio Camacho, Jakub Blaszczykowski, John Anthony Brooks, Ohis Felix Uduokhai, Yannick Gerhardt, and Marcel Tisserand, Martin Schmidt’s team will face the league leaders considerably weakened.
Arturo Vidal will miss the game due to suspension, while Manuel Neuer and Thiago Alcantara are still struggling with injuries, and they won’t be included in Bayern’s traveling squad. 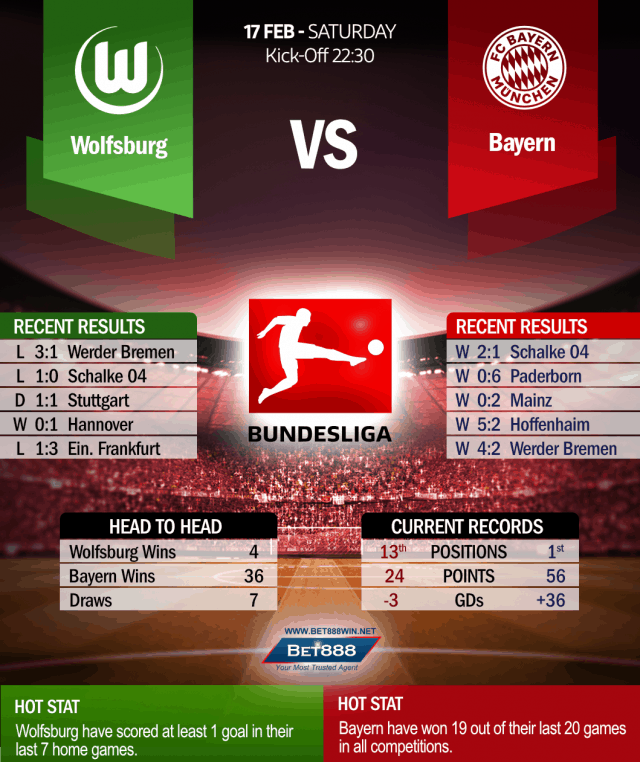