Vietnam U23 vs Uzbekistan U23

Vietnam U23 vs Uzbekistan U23

It is one footballing final that truly belonged to the ultimate underdogs. Neither team has ever made it beyond the group stage of the biennial championship prior to this year, mind-boggling indeed that they have made it so deep into this tournament.
Both contenders lost a match in the group stage. Vietnam lost 2-1 to South Korea, but the Koreans were would be thrashed 4-1 by Uzbekistan in the semis. On the other hand, Uzbekistan lost 1-0 to Qatar, who then lost to Vietnam, also in the last four.

Overall, Vietnam have scored 7, while conceding the same amount of goals. Nguyen Quang Hai leads the team scoring with 4 goals. Uzbekistan have a tighter defensive unit, conceding just twice. They have ten goals to their name too. Jasurbek Yakhshiboev leads with three.
Just last month, Vietnam’s U23 team lost 1-2 to Uzbekistan U23 at the M150-Cup in Thailand. Uzbekistan then went on to defeat Japan in the final, while Vietnam came third after beating Thailand.

It’s currently snowing in Changzhou, the city in China’s Jiangsu Province where the final will be played.

Temperatures are forecast to be freezing on Saturday, which will suit the Uzbeks, rather than the tropical Vietnamese, more fine 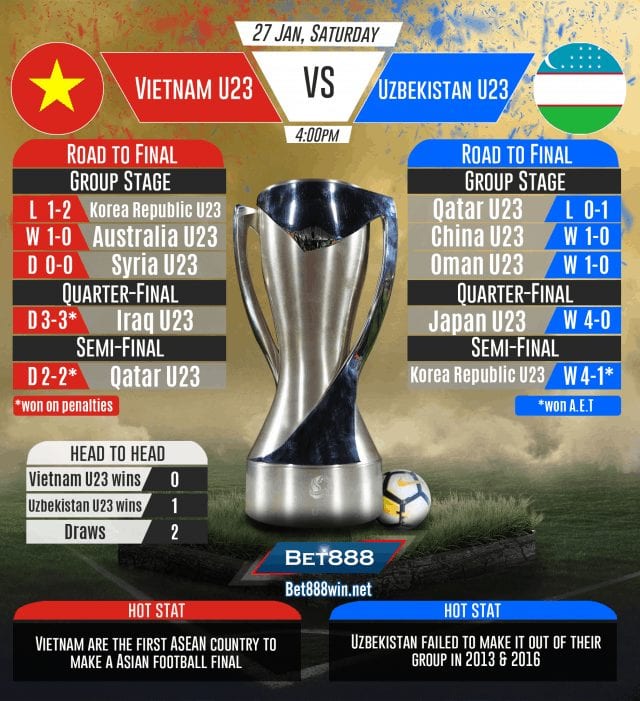