Just five points separate third-placed Valencia from fourth-placed Real Madrid. The gap could crank up to eight of course with a win for the home side at the Mestella.

Real thrashed Deportivo 7-1 last Saturday but were immediately brought down to earth in midweek as they suffered a 2-1 reverse to Leganes in the Spanish Cup. They were eliminated on the away goals rule.

Valencia suffered a shock 2-1 defeat at lowly Las Palmas last weekend, but in contrast to Real, they redeemed themselves by overcoming Alaves on penalties after a 3-3 aggregate draw in the Spanish Cup.

Valencia, who have finished 12th in each of the last two seasons, have won seven and lost just one of their 10 home league fixtures this season – scoring 21 times and conceding just six.

But it is the recent form that’s worrying the Peter Lim-owned outfit. After the blazing start, Los Che have lost three of their last five league games and failed to keep a clean sheet in any of their last eight La Liga encounters.

Sergio Ramos and Karim Benzema started their first game of the year in the Leganes defeat and look set to hold on to their spots. Valencia have problems in defence with Ruben Vezo and Gabriel Paulista both suspended, while Jeison Murillo remains injured 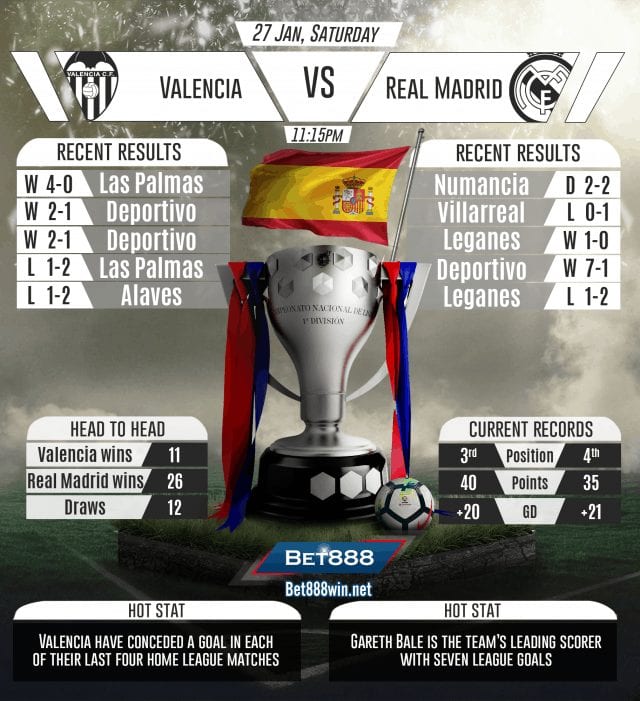