Amazingly, this will be only the second time both teams will do battle at Wembley, old or new. The one and only previous edition was in the 2009 League Cup final, which Man Utd won after a penalty shootout.

Spurs may be riding on an eight-match unbeaten run in all competitions but Man Utd are in imperial form as well, having rattled off five wins on the bounce. The two goalkeepers for Jose Mourinho’s side, David de Gea and Sergio Romero, have also kept six successive clean sheets between them.

Man Utd have only lost four of the last 33 top-flight meetings, but those four wins for Spurs were all clinched in the 11 most recent league encounters.
Spurs can’t quite figure out how to beat their fellow top-six sides, having earned just a win in five games this season Arsenal, Chelsea, Man City, Man United and Liverpool, who they meet this weekend.

Tottenham manager Mauricio Pochettino welcome back captain Hugo Lloris and Christian Eriksen following their recovery from illness, but the match comes too soon for Toby Alderweireld, Serge Aurier, Danny Rose and Harry Winks.
Man Utd, meanwhile, are set to hand Alexis Sanchez his first EPL start for the club. The only members of United’s squad ruled out with injury are Zlatan Ibrahimovic and Eric Bailly. 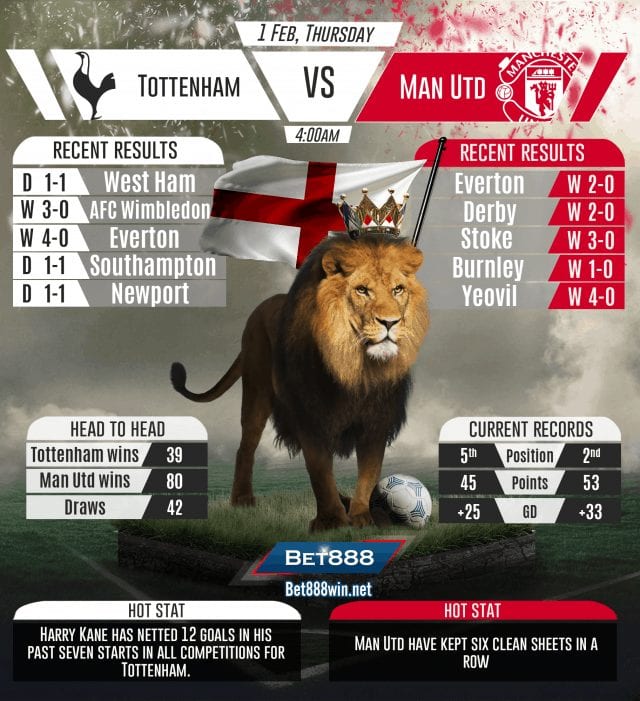