Having become the first side to beat Man City, Liverpool will aim to continue their trail-blazing stretch of good form when they head to Wales.

Swansea have scored just six goals, the least-scoring home side in the league this season, while Liverpool’s 29 away goals make them the highest-scoring away side.

The Reds have scored at least twice in each of their six EPL away matches and need one more of that order to match a record set between February and May 2014.
Liverpool won the reverse fixture 5-0, with four of the goals scored in the second half. Overall, 14 of their last 15 EPL goals in this fixture have been scored in the second 45 minutes.

Roberto Firmino enjoyed a brace that day, continuing his excellent scoring record against the Swans. The Brazilian has scored five times in his last three EPL appearances against them.

Club record signing Virgil van Dijk is unlikely to feature after suffering a hamstring injury. Daniel Sturridge, subject of a transfer move to Inter Milan the past week, and Alberto Moreno will also sit out with ankle injuries.

Swansea, meanwhile, could receive a timely boost with the return of the attacking duo of Tammy Abraham and Renato Sanches. Both of them missed the 1-1 draw with Newcastle last weekend. 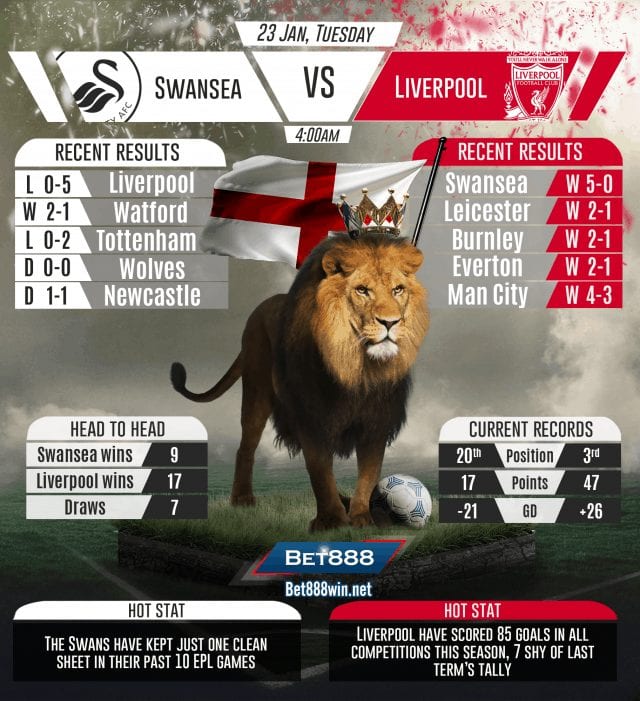