Following two consecutive draws, 1-1 with Germany and 3-3 with Russia, Spain will host the South American heavyweights, Argentina, at the Wanda Metropolitano Stadium in Madrid. The Red Fury has easily secured first place in their qualifying group ahead of Italy, with nine victories and an impressive +33 goal difference. A 2-0 victory over Italy has handed a huge morale boost to the Albiceleste who will be making their twenty-first Fifa World Cup appearance in Russia. After losing 1-0 to Germany in the last World Cup final, Argentina has gone through a rough time followed by many ups and downs, but Jorge Sampaoli is determined to bring his side back at the very top of the world’s football. It will be the fourth time in twenty years these teams face each other in a friendly match, and first since 2010, when Argentina outplayed the European giants, beating them with four goals to one.

Marcos Alonso and Alvaro Odriozola are waiting for their first minutes in the red shirt after staying on the bench against Germany. Sergio Aguero has suffered a knee injury, and won’t be ready for the encounter, so Gonzalo Higuain should again take his place, as he did against Italy, while Sergio Romero could regain his place between the posts instead of Willy Caballero 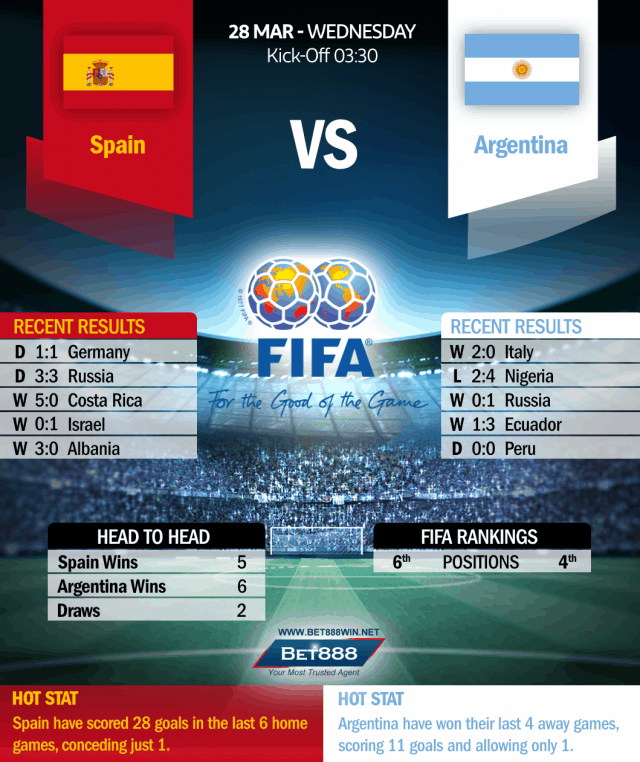