Since leaving Southampton at the end of the 2013/14 season, Mauricio Pochettino has yet to lose a EPL match at his old stomping ground.

The Argentine will be hoping that this record continues as Tottenham continue their pursuit of a top-four spot. Spurs are currently in fifth spot, three points behind fourth-place Chelsea.
For Harry Kane, another milestone beckons. The Englishman, who is now Spurs’ all-time leading EPL scorer with 98 goals, needs two goals more to become the 27th player to score a century’s worth of EPL goals.

Dele Alli, who isn’t enjoying a quality season, has a good record against the Saints, scoring five times against them in four previous encounters. Interestingly, only two players have been involved in more goals in their first four EPL matches against an opponent.
Southampton, just a point above the relegation zone, are winless in five home matches against Spurs since returning to the EPL big time in 2012. They were thumped 5-2 in the first meeting back on Boxing Day.

Harry Winks has been sidelined for the rest of month with an ankle injury, with Danny Rose (knee) a similar timescale.
In more positive news, Toby Alderweireld is nearing a return. The centre-back has been out since November with a hamstring injury and hopes to be back in first-team action for the trip to Liverpool on February 4.

Mauricio Pellegrino has no fresh injury concerns, with Maya Yoshida and Charlie Austin (both hamstring) out for the foreseeable 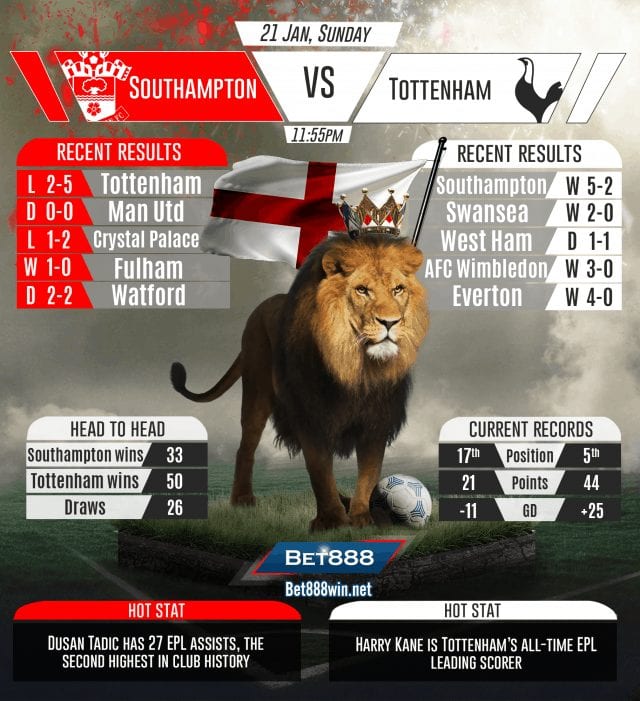