The Ukranian champions, Shakhtar Donetsk, will face the Serie A side Roma at the Metalist Stadium, looking to prolong their European dream. It will be the first time these teams are facing each other at the European scene since 2011. Shakhtar have destroyed I Giallorossi then with six goals to two in aggregate, but the roles are reversed now.

The Miners have already eliminated one Italian team from the competition, as they have finished second in their group ahead of Napoli. However, Roma renounced their hopes of winning the title in Italy, and they are entirely focused on the Champions League. The Yellow and Reds are struggling away from the Stadio Olimpico, as they have only managed to secure two victories in their last eight away games, while Shakhtar won three out of the previous five home matches, scoring twelve times in the process.

Wellington Silva could miss the game due to injury, and Paulo Fonseca can’t count on the suspended Darijo Srna. The visitors will be deprived of the services of Rick Karsdorp and Luca Pellegrini, both struggling with knee injuries. Eusebio Di Francesco is hoping to have Maxime Gonalons available although he can be more than happy to see Radja Nainggolan back to action after some minor thigh problems. 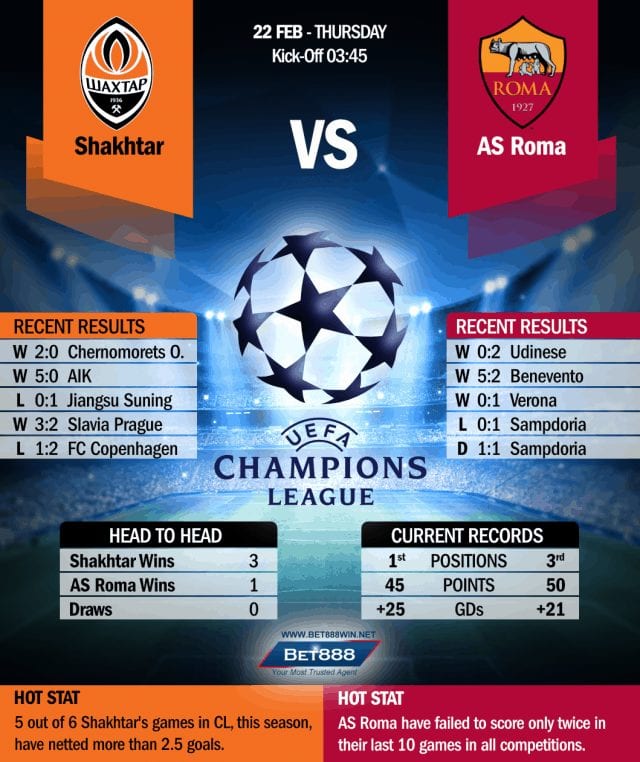