After a comfortable 2-0 win over Real Betis at Mestalla, Valencia will travel to Sevilla, who defeated Athletic Bilbao at Ramon Sanchez Pizjuan last weekend. The Oranges are having a magnificent season in La Liga, playing attractive football through the likes of Rodrigo, Goncalo Guedes, Zaza, and Santi Mina. However, Valencia have struggled in their away games, losing six times in the previous ten matches, including a disappointing 2-1 defeat to Las Palmas. The Andalusians desperately need a victory to boost their chances of getting back to the Champions League promotion race. Los Rojiblancos have only two wins in their last five home games, losing to Atletico Madrid and Betis, by conceding ten goals in the process.

Vincenzo Montella can’t count on Sebastien Corchia who has suffered a groin injury and Jesus Navas who has muscular problems. Jose Mena, Juan Soriano, and Lionel Carole should watch the game from the stands for tactical reasons. Andreas Pereira has sustained a severe injury against Barcelona in Coppa del Rey after a scandalous tackle from Sergi Roberto, but he could return to action this month. Ezequiel Garay is not available due to a muscle strain, while Santi Mina may recover from a hamstring injury he picked up on the training ground. 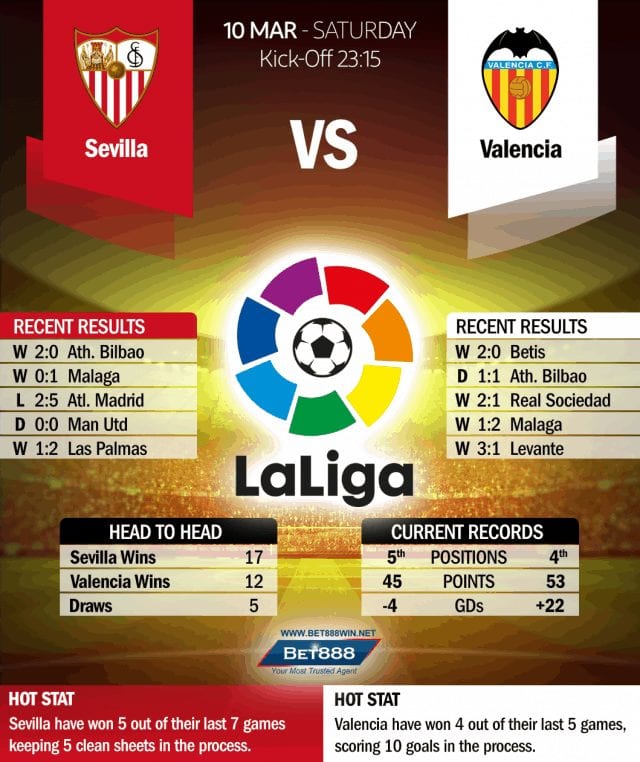