With just three victories away from regaining La Liga title, Barcelona will be traveling to Andalusia to face Sevilla, hoping to secure all three points and come one step closer to overthrow arch-rivals Real Madrid. The home side is experiencing a turbulent season in the national championship although they recently made a small sensation by eliminating Manchester United from the Champions League. Los Rojiblancos have three defeats in last five La Liga matches, including a humiliating 5-1 loss to Atletico Madrid at Ramón Sánchez Pizjuán Stadium. Blaugrana is still the only undefeated team in Spain, and they intend to extend their impressive 15-game lossless away streak against the team that has failed to win in three out of their previous seven home games.

Sevilla’s list of injured players is not getting any shorter, as Jesús Navas and Sergio Escudero joined already sidelined Lionel Carole, Sébastien Corchia, Daniel Carrico, and Jose Mena. Pablo Sarabia will also skip the encounter after picking up a red card against Leganes. Lucas Digne, Sergio Busquets, and the first-choice goalkeeper, Marc-André ter Stegen are unavailable for the visitors, as are all struggling with injuries. But, the recent adductor problems suffered by Leo Messi give Ernesto Valverde a sizeable headache, with the Argentinean wizard might find himself out of the squad 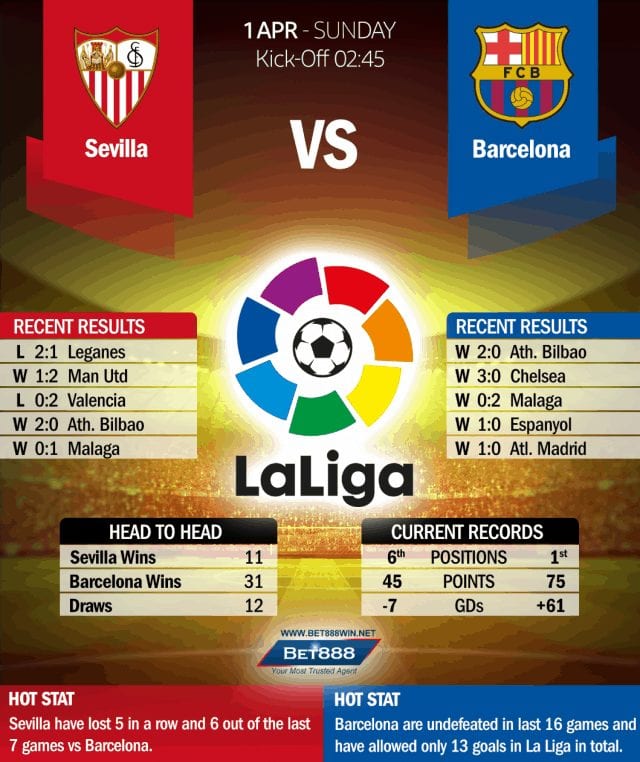