Following rather unconvincing display against Shakhtar Donetsk in the Champions League, Roma will face a difficult task as they take on AC Milan at the Stadio Olimpico. Although they won three games in a row in the Serie A, The Yellow and Reds have recorded a notable drop in form comparing to the season kick off. Prior a 1-0 victory over Verona, Roma didn’t win in seven consecutive matches, conceding at least one goal in each one of them. Milan’s wealthy owners invested a significant amount of money last summer hoping to bring the Italian giants back to the top of Europe, but Vincenzo Montella has failed to leave up to expectations. However, after Gennaro Gattuso took charge of the seven-time European champions, the Rossoneri have finally started to produce desirable results both in Italy and the Europa League. Milan are undefeated in 2018, having won seven out of the previous nine games in all competitions, as they are looking to close the gap on the city rivals Inter.

Roma’s new acquisition, Jonathan Silva, will miss the derby due to injury, same as Rick Karsdorp and Maxime Gonalons, while the visitors are still without Andrea Conti, who suffered the cruciate ligament damage during the first half of the season. 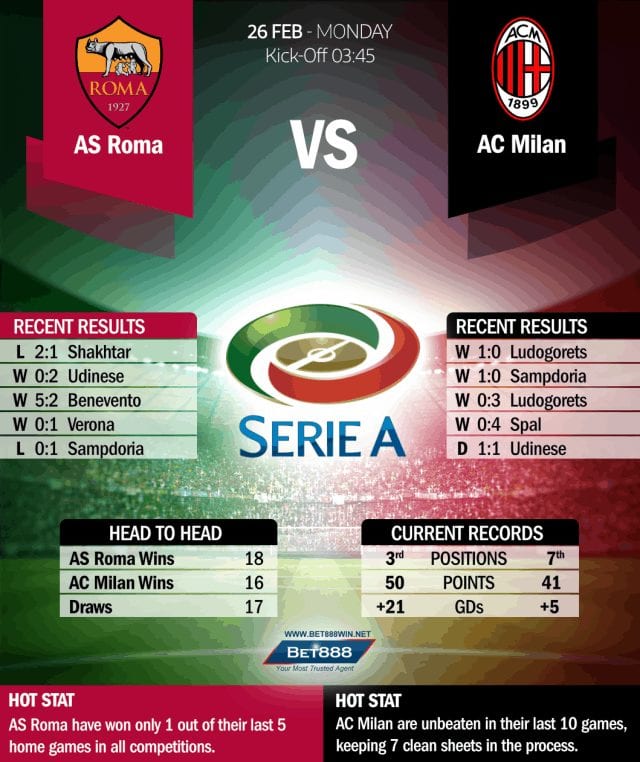