Two European gaints are set to meet at the Santiago Bernabeu, where Real Madrid host Paris Saint-Germain.
The home team has had a miserable first half of the season, as they have already lost any hope of closing the gap on their arch-rivals Barcelona, and winning the Champions League for the third time in a row seems to be the only thing that can save Zinedine Zidane from being fired. Los Blancos have finished second in their group behind Tottenham Hotspur, while PSG managed to secure the first spot ahead of Bayern Munich, having scored 25 goals in the process.

The French heavyweights have won fourteen of their last sixteen games in all competitions, including a stunning 8-0 victory over Dijon in the Ligue 1. Unai Emery’s team has also won nine out of their last ten matches away from Parc des Princes. Real Madrid have scored twelve goals in last two home games against Real Sociedad and Deportivo La Coruna, showing glimpses of their incredible striking pedigree.

Zidane will be deprived of the services of Dani Carvajal, Dani Ceballos, and Jesus Vallejo. On the other side, Thiago Motta is still out due to fatigue problems, and the forgotten Hatem Ben-Arfa will stay in Paris because of a leg injury. 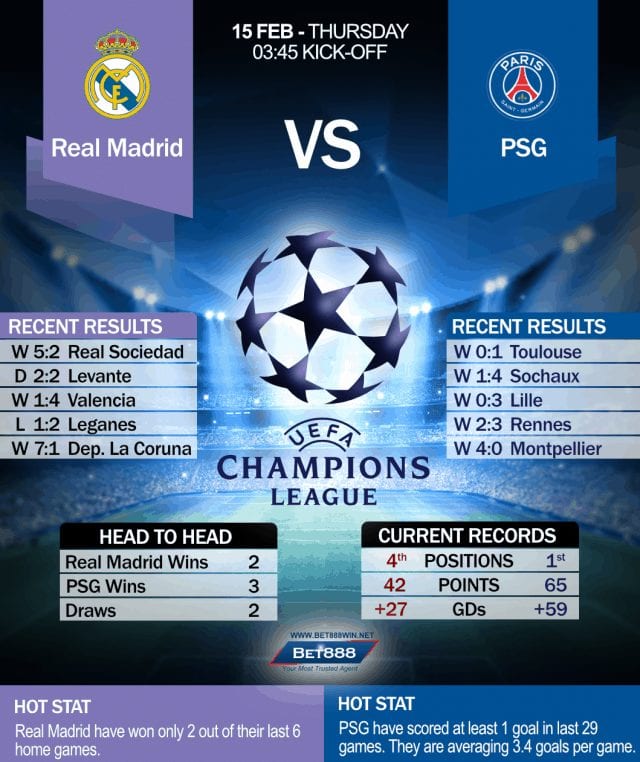