Real Madrid have defeated Bayern Munich at the Allianz Arena by two goals to one after coming back from a one-goal down, but the Bavarians have shown some glimpses of their potential, and anything can happen at Santiago Bernabeu in the second leg of the Champions League semi-finals. Zinedine Zidane has decided to give some rest to almost every player of his starting eleven in a game against Leganes last weekend, which Los Blancos won 2-1 thanks to two first-half goals from Bale and Mayoral. The Reds, on the other hand, have demolished Eintracht Frankfurt at home by four goals to one, as they hope to maintain the same rhythm against the Spanish giants. After losing La Liga title to Barcelona, Real Madrid must look for a third consecutive Champions League title to save a turbulent season, but Jupp Heynckes first objective is regaining the European crown with the Bavarians, and considering Bayern performance over the last couple of months, this battle is far from its conclusion.

Nacho Fernández, Daniel Carvajal, Raphaël Varane, and Isco are all ruled out with injuries in the home side, while Arturo Vidal, Manuel Neuer, and Kingsley Coman won’t be available for the visitors, as well as Arjen Robben and Jerome Boateng, as both sustained injuries in the first game in Germany. 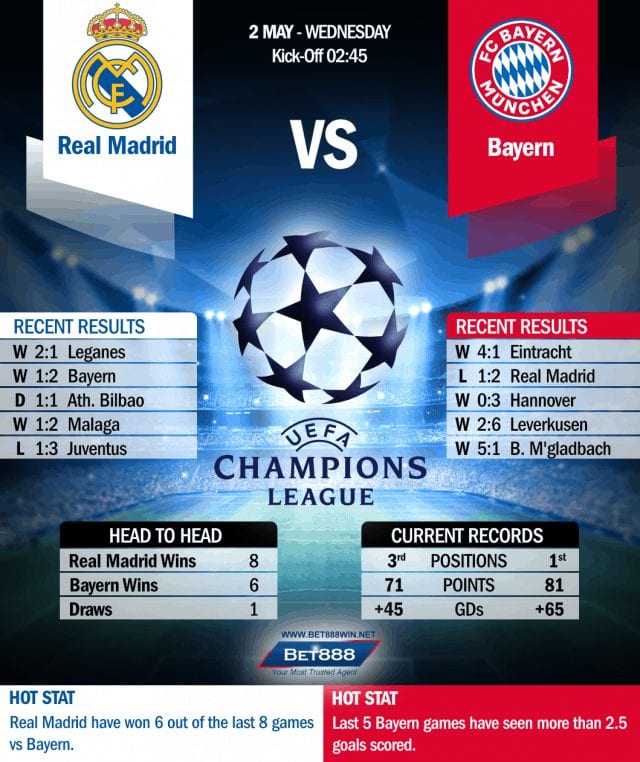