Following an impressive 3-1 victory over Paris Saint-Germain in the Champions League, Real Madrid will face Real Betis at the Estadio Benito Villamarin.
Los Blancos have written La Liga title off, but they are looking to secure three points to boost their morale ahead of the second leg against the French heavyweights. The visitors have scored eighteen goals in their last four road games, while Betis conceded eight in previous four home matches in the league. But, Los Verdiblancos are chasing the Europa League spot, and they won’t surrender without a fight, especially considering the fact they have already beaten Los Merengues this season at Santiago Bernabeu.

Antonio Sanabria and Joel Campbell are still sidelined due to injuries they picked up during the first half of the season, while Zouhair Feddal could miss the rest of the campaign after rupturing his Achilles tendon. However, Quique Setien is delighted to see his best forward, Ruben Castro, ready for the encounter after returning to training earlier this week.

On the other hand, Gerth Bale is now back to full fitness, and Zidane could test him from the first minute. Jesus Vallejo (thigh injury) and Dani Ceballos (ankle problems) will most likely skip Real Madrid’s trip to Andalusia. 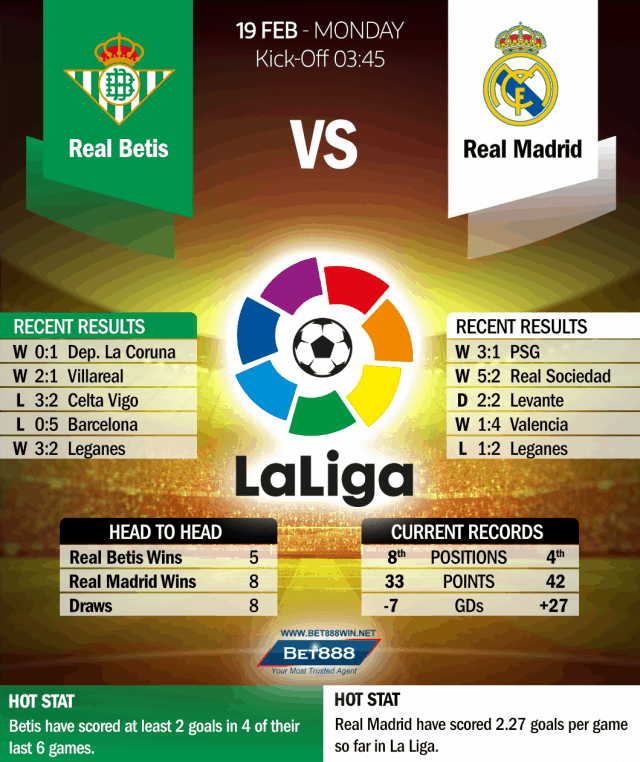