Two offensively-minded teams are set to battle each other at the Red Bull Arena, where RB Leipzig are hosting Borussia Dortmund. Both sides are hoping to secure all three points, as they want to qualify for the UEFA Champions League. The visitors are currently second-placed with only three points lead over Bayer Leverkusen and Leipzig that occupy the fourth position. The Bulls are in minor crisis, with three consecutive losses; the two of them came at home against Koln in the Bundesliga, and versus Napoli in the Europa League. The Black and Yellows have failed to win against Augsburg at the Signal Iduna Park, but they have managed to keep their 12-game game undefeated streak in all competitions. A potential draw would hardly work for either side, mainly because their direct competitors, Frankfurt and Schalke, are playing at home as huge favorites, against Hannover and Hertha.

Marcel Halstenberg and Konrad Laimer are unavailable in the home team due to injuries, while Dortmund’s chief of staff Peter Stoger can’t use Sebastian Rode, Andriy Yarmolenko, Erik Durm, Raphael Guerreiro, and Shinji Kagawa as all of them are struggling with injuries, while Jadon Sancho could be back on the field after damaging ankle ligaments during the match against Koln. 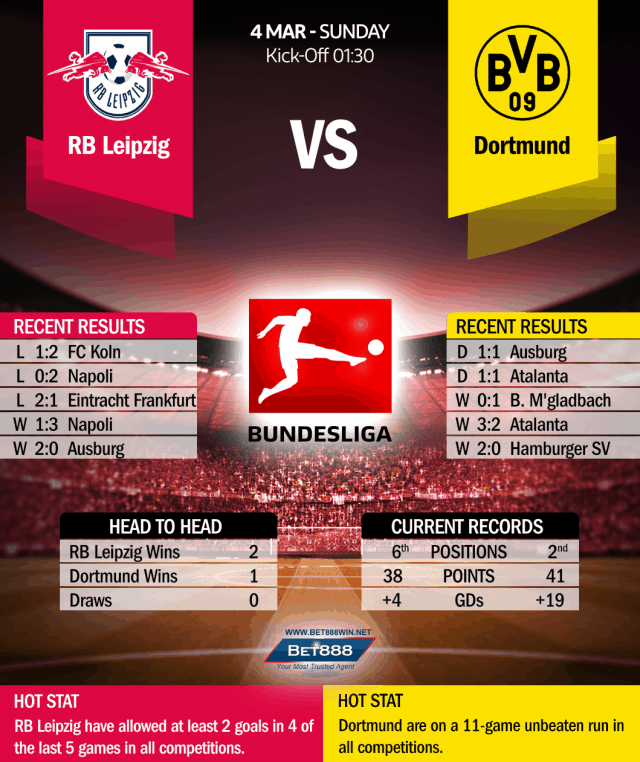