RB Leipzig are set to host the undisputable Bundesliga leaders, Bayer Munich, at the Red Bull Arena, following the Europa League second leg tie against Zenit St Petersburg in which they’ve managed to avoid defeat and advance to the next stage. The Bulls are currently occupying the sixth place with every right to look for the Champions League qualification spot as they have only four points less than fourth-placed Bayer Leverkusen. However, to enhance their chances of closing the gap on the Company XI, they need to get a positive outcome against the hardest opponent they can get, considering that the Bavarian giants have won nine out of their previous ten away matches in all competitions, including this week’s 3-1 victory over Besiktas.
Marcel Halstenberg has suffered a cruciate ligament rupture and won’t return to action until the end of the season. Marcel Sabitzer has a back problem, but he might be fit for the encounter, while the appearance of Konrad Laimer and Kevin Kampl still hangs in the balance. As for the visitors, Manuel Neuer, Kingsley Coman, and Corentin Tolisso are all sidelined due to injuries, but Jupp Heynckes is hopeful Arjen Robben and Thiago Alcantara could recover from slight physical problems. 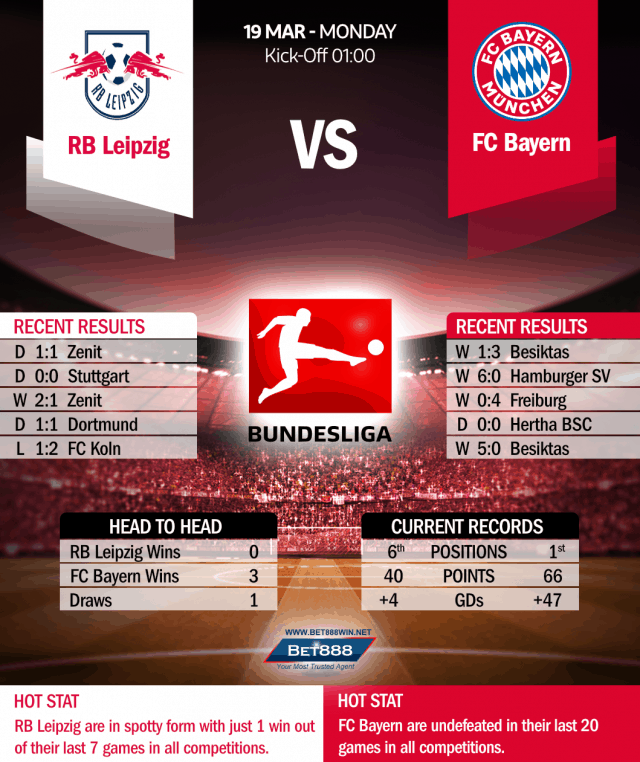