Real Madrid and Paris Saint-Germain have played an intense game at the Santiago Bernabeu, which the Spanish champions managed to win eventually thanks to two late goals from Cristiano Ronaldo and Marcelo although the French heavyweights played better and had more opportunities to snatch a positive result. Now, the undisputed Ligue 1 leaders need to be aggressive and push from the first minute to try to score an early goal, but it could open much space behind for the pacey Real Madrid’s players to punish them on counter-attacks. Los Blancos have significantly raised their offensive game over the last couple of weeks, scoring twenty-five goals in the previous eight games. The Parisians are also very efficient, as they have netted thirty times in their last ten matches in all competitions.

Unay Emery can’t count on his best player and the club’s biggest star, Neymar Jr, who has suffered an ankle injury during the match against Marseille. Hatem Ben Arfa has dropped from Emery’s plans after the coach decided to transfer him to the second team, while Marquinhos, who returned to training after injury could be included in the squad.

On the other hand, Zinedine Zidane has big decision to make when it comes to fielding his midfield line decimated by the injuries of Luka Modric and Toni Kroos, with the Germany international’s appearance still hanging in the balance. The third-choice centre-back, Cesar Vallejo, is ruled out because of a thigh strain. 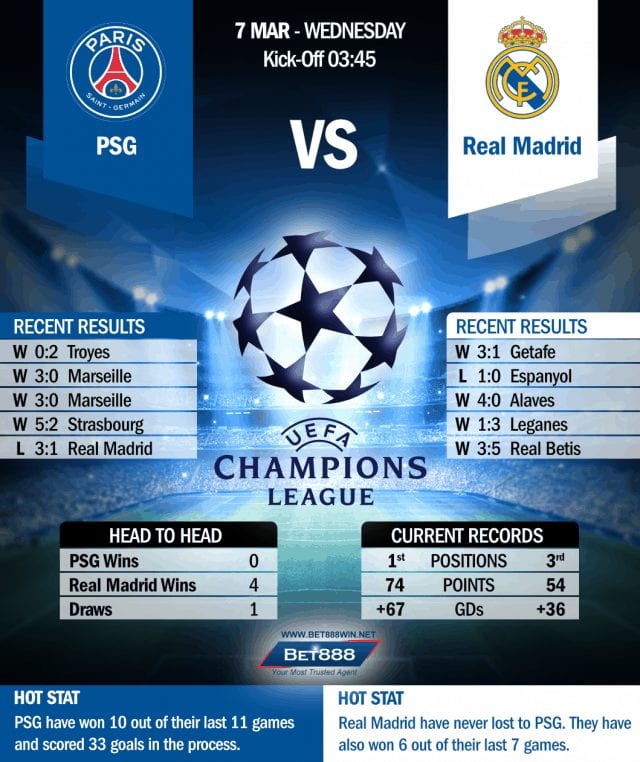