Following a remarkable comeback against Egypt last weekend thanks to two injury-time goals scored by Cristiano Ronaldo, Portugal will play against the Netherlands, who lost to England with one goal to nil. The match will take place at the Stade de Genève in Switzerland. After securing their presence in Russia, the Selection of the Quinas have beaten Saudi Arabia and drew 1-1 with the United States, and this will be their first high-profile game ahead of the World Cup. The Three Lions have ended the Dutch five-game winning streak in Ronald Koeman’s first game in charge of the national team, but despite the loss, Oranje have shown determination and hunger, something they were missing during qualifications. After a 1-0 defeat to Chile in the FIFA Confederations Cup, Portugal have won seven out of eight matches conceding just four goals in the process, while the Netherlands notably improved their performances since last summer, considering they’ve achieved eight victories in the previous ten games.
Fernando Santos has fielded his best starting eleven against Egypt, with Cristiano Ronaldo and Andre Silva in the attack, but he might consider making some changes against the Dutch side, given the weak display from Joao Mario and Bruno Alves. As for Holland, Ajax sensation, Justin Kluivert, could get a chance to make his debut for the national team after watching the game against England from the bench. 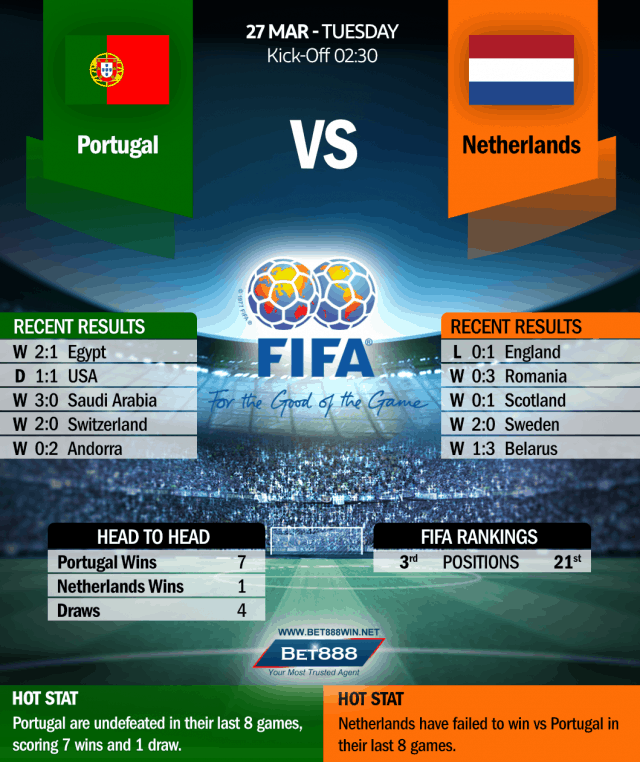