After the Champions League elimination, Paris Saint-Germain can fully focus on their commitments in the Ligue 1, as they are set to host the struggling Angers side at the Parc des Princes following a stunning 5-0 victory over Metz Although they have virtually secured the title, there’s still a hunger among the Parisians to prove their worth and regain their French top-flight crown, and considering their performances in the national championship, Angers stand no chance in this meeting. Unai Emery’s team is the only one in Europe who has achieved victories in all of their home games this season, with +50 goal difference. Les Scoistes are desperate to avoid relegation, but they’ve struggled away from Stade Raymond Kopa managing to secure just one win in their previous ten road matches, losing five times in the process and keeping a clean sheet only once (against Bordeaux). PSG have scored thirty-one goals in the last seven home encounters through the likes of Kylian Mbappe, Edinson Cavani, Angel Di Maria, and Christopher Nkunku lately.

Neymar Jr could miss the rest of the season after injuring his metatarsal against Marseille, while Hatem Ben-Arfa seems to be on his way out after falling out of Emery’s plans. Stephane Moulin’s only concern is Pierrick Capelle’s slight injury, but according to the latest reports, he should be ready for the match. 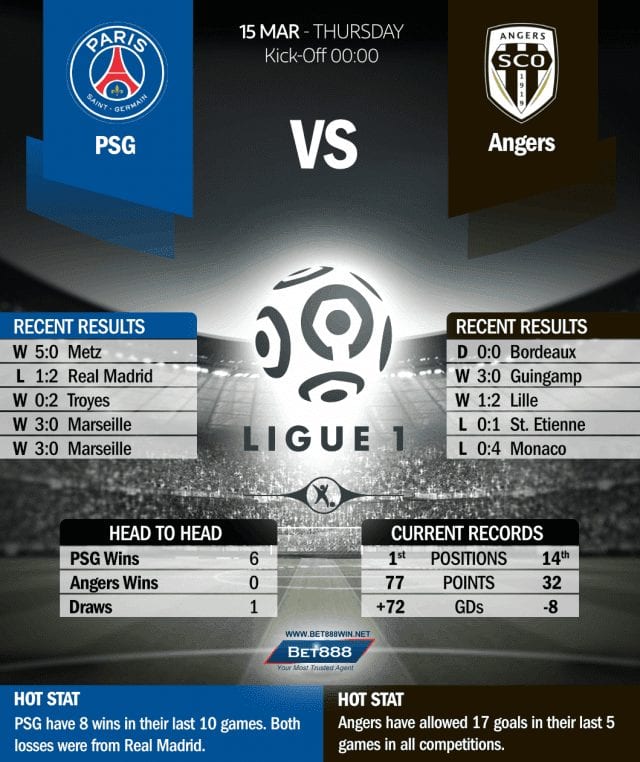