At the Ullevaal Stadion in Oslo, Norway and Australia will play a friendly game that will be Australia’s first preparation match ahead of the upcoming World Cup. The Socceroos have earned their ticket to Russia following the win over Honduras in the playoff by three goals to one in the second leg after getting past Syria in extra time. Norway have failed to reach the most prestigious international tournament, as they have finished fourth in their group behind Germany, North Ireland, and the Czech Republic. The Scandinavian side have lost their previous two international friendlies against Slovakia and Macedonia without scoring a goal, and the head coach, Lars Lagerbäck, is looking to revive his team’s game especially in the final third. It is going to be their second meeting after a friendly match back in 2004 which ended in a 2-2 draw, and Australia will have a huge task to beat Norway who haven’t lost five consecutive games at home, proving to be very tough hosts.
Great news for the home fans, as Martin Odegaard has returned to the national team after a struggling season with Heerenveen along with Havard Nordtveit and Stefan Johansen, while Haitam Aleesami, Alexander Sorloth, and in-form Bournemouth forward Joshua King are all set to miss the encounter. Bert van Marwijk has also made a couple of changes comparing to the playoff squad that faced Honduras, with Alexsandar Susnjar, Brad Jones, James Meredith, Dimi Petratos, Andrew Nabbout, Josh Brillante, James Troisi and Josh Risdon have all been summoned for the trip to Norway. 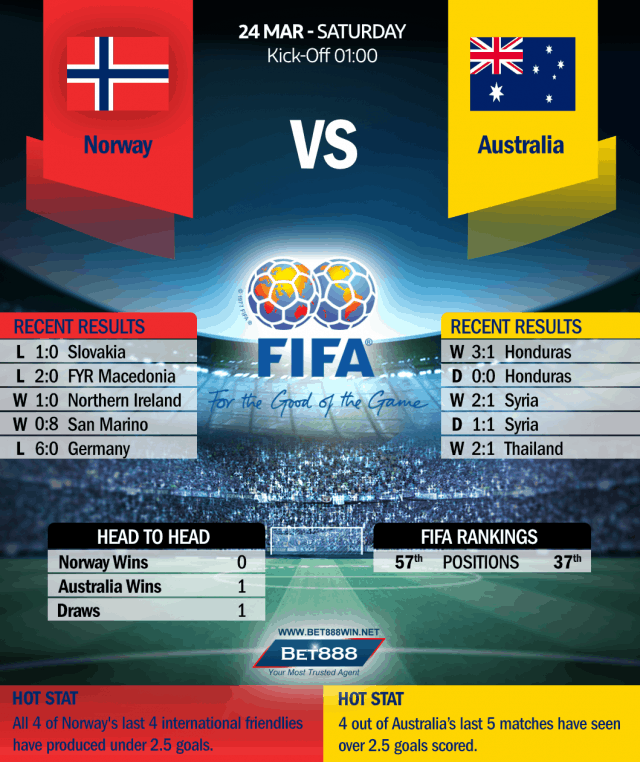