After a stunning 5-2 win over Guingamp on the road, OGC Nice will host the unstoppable league leaders, Paris Saint-Germain at the Allianz Riviera looking to repeat last season’s success when they beat the Parisians with three goals to one. The Eaglets have no chance of reaching the European football following a rather disappointing first half of the season, but they will be motivated to prove their worth against the best French side. The Red and Blues have virtually regained the Ligue 1 title, but after the Champions League elimination, they are eager to please their supporters in the national championship. Nice have conceded nine goals in last seven games in Ligue 1 which could be their main problem against the rampant PSG team who scored seventeen times in their previous five games in the league.
Lucien Favre doesn’t have Mickael Le Bihan at his disposal as the experienced centre-forward suffered a broken tibia and fibula last year and won’t be able to return to action until the summer. Unay Emery, on the other hand, will need to replace Thiago Motta who picked up a red card against Angers and his main star, Neymar, who has undergone ankle surgery and should miss the rest of the season. 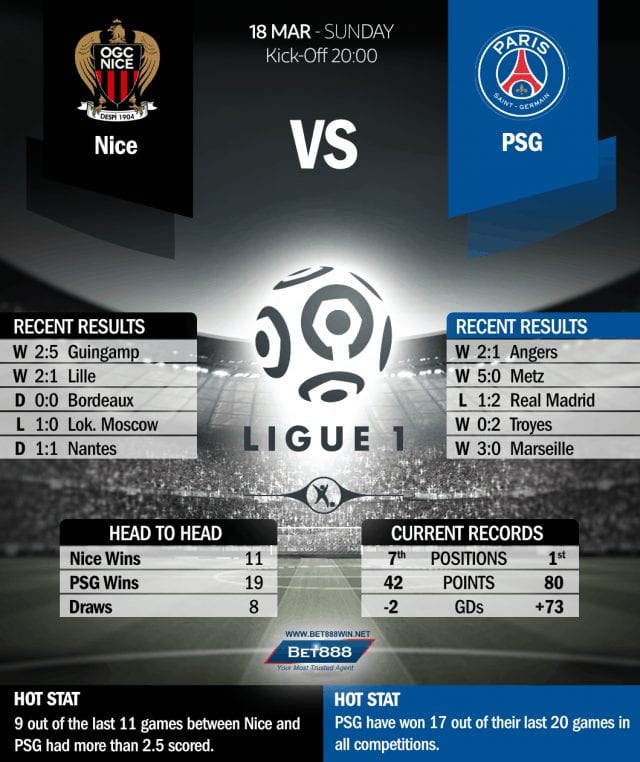