Napoli players are determined to prolong their dream of lifting the Serie A trophy after almost thirty years, and they need to secure all three points against the big rivals AS Roma this Saturday at the Stadio San Paolo to extend their lead over Juventus. Considering the Yellow and Reds’ recent displays, they have minimum chances against the Light Blues that are playing the most beautiful football in Italy and scoring on a regular basis since the beginning of the season. Mauricio Sarri’s team have won their previous six games at home, bagging thirteen goals in the process, while Roma managed to win only three times in their last ten matches away from the Stadio Olimpico in all competitions. The Giallorossi are traveling to Naples under severe pressure, as they are desperate to avoid defeat and remain in fourth place ahead of Sampdoria and Milan that are steadily closing the gap on them.

The prosperous Brazilian winger, Leandrinho, and the experienced centre-half, Vlad Chiriches, are having muscle problems, and won’t be available for the derby.
As for the visitors, Rick Karsdorp is ruled out because of cruciate ligament rupture, but Eusebio Di Francesco’s main concern is the injury Lorenzo Pellegrini picked up against Milan last weekend that will sideline him for at least a month. 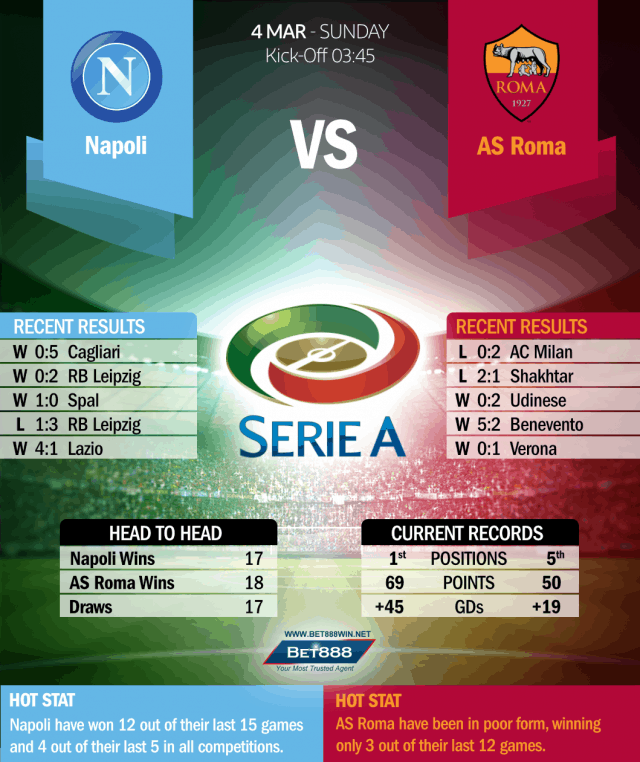