Serie A leaders Napoli are set to meet Bundesliga side Leipzig at the Stadio San Paolo in the first leg of the Europa League knockout stage.

The Light Blues have had exceptional first half of the season in Italy, and they continued the same run in 2018 by winning five consecutive league matches, including a stunning 4-1 victory over Lazio last Saturday. Napoli have won ten of their last fifteen home games in all competitions, while Leipzig lost two of the last five encounters away from the Red Bull Arena. The Italian giants have secured the maximum fifteen points in the domestic league since New Year, and they intend to maintain in the same rhythm in the Europa League.

Mario Rui is expected to replace Faouzi Ghoulam, who has undergone surgery and will probably return to the field at the end of February. Another defender, Vlad Chiriches, won’t be on the list, due to a leg problem, while Marek Hamsik should be able to play after suffering a slight back fracture. Mauricio Sarri will assess the condition of Arkadiusz Milik, who has been struggling with a disastrous knee injury for the last few months.

According to the latest reports, Emil Forsberg has returned to training after missing last weekend’s game with Augsburg, so Ralph Hasenhuttl have all his star players ready. 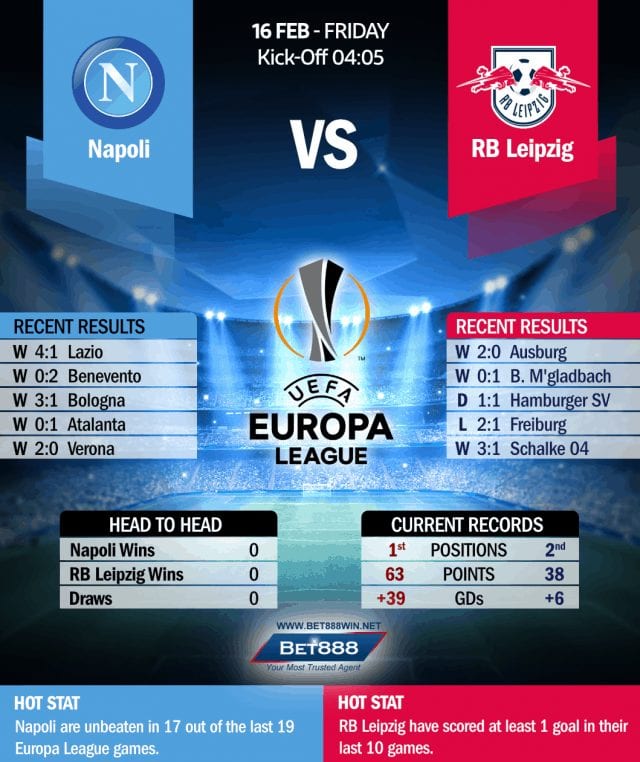