Both teams will be meeting for the second time this season at the Etihad. The first, back in October, ended in a comfortable 3-0 win for Man City.
Sergio Aguero grabbed a penalty, and was joined on the scoresheet by Leroy Sane and Nicolas Otamendi.

That also marked the only one time in the five most recent meetings City have been able to score two goals or more against Sean Dyche’s men.

Since a mid-December win against Stoke, the Clarets have gone off the boil with three draws and a defeat. The loss, a 1-2 against Liverpool on New Year’s Day, was heartbreaking as they conceded in stoppage time.

For Pep Guardiola, who has taken English football by storm this season, it will mark the start of his quest to win a fifth domestic cup as a manager.

Captain Vincent Kompany is a doubt after missing the both the Crystal Palace and Watford games due to a calf strain, while the promising Phil Foden is unlikely to feature after picking up an ankle ligament injury.

Gabriel Jesus will also be out after picking up an knee ligament problem against Palace.

Burnley are expected to be without influential midfielder Scott Arfield. Defender Stephen Ward (knee) and striker Chris Wood (leg) are coming along fine but will not be risked. 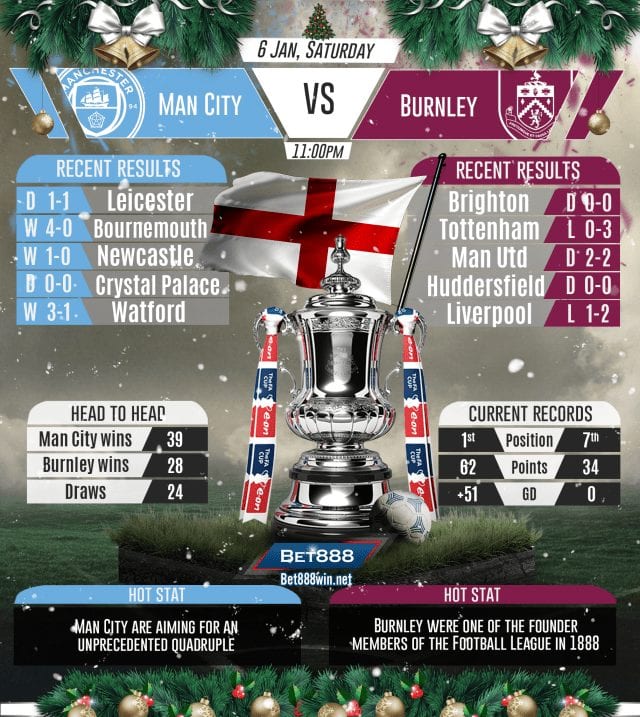