From Mainz perspective, a match against Schalke at the Opel Arena could be decisive in their relegation battle following two consecutive draws against direct competitors, Wolfsburg and Hamburger SV. On the other hand, the Miners are fighting tooth and nail to secure the Champions League promotion spot, as they have a two-point lead over the fifth-placed Bayer Leverkusen. Although they are not playing attractive football, Schalke have demonstrated great desire and determination and managed to achieve three victories in a row, conceding just one goal. Mainz have great defensive troubles, as they have lost three out of their last five games at home, without keeping a clean sheet in each one of them.

Avoiding defeat against Schalke in front of home supporters is imperative for the Carnival club, but without Robin Zentner, Emil Berggreen, and Leon Balogun, Sandro Schwarz will have to come up with an emergency plan, which could include Nigel De Jong and the talented shot-stopper, Florian Muller, especially if the first-choice goalkeeper, Rene Adler, fails to recover from illness. Domenico Tedesco is also facing a dilemma following a few injuries sustained by Weston McKennie, Leon Goretzka, and Alessandro Schopf, while the presence of Thilo Kehrer remains questionable. 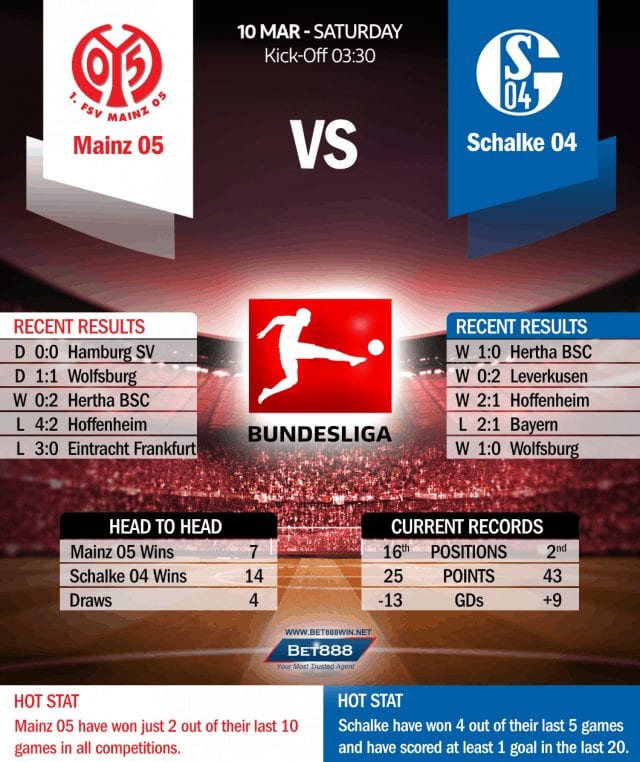