Following a convincing 5-0 victory at Dragao against Porto in the Champions League, Liverpool are set to host West Ham United at Anfield this Saturday, looking to secure another three points and boost their Champions League promotion hopes. The Reds have won three out of their last four home games, bagging thirteen goals in the process, while the Hammers failed to keep a clean sheet four times in a row away from the London Stadium. David Moyes’s team will have to play at their very best to stop Liverpool’s firepower, as Sadio Mane, Roberto Firmino and Mohamed Salah are in tremendous form. The deadly attacking trio has scored sixteen times in the last six games.

Jurgen Klopp will have all of his key players ready for the encounter except Nathaniel Clyne, who is yet to recover from a long-standing back injury; the third-choice goalkeeper, Adam Bogdan, is ruled out due to knee problems.
Edimilson Fernandes, Andy Carroll, and Pedro Obiang won’t be able to attend the game in all likelihood, as all of them are struggling with injuries, while club’s best player, Manuel Lanzini, remains in doubt. Arthur Masuaku is unavailable after picking up a red card against Wigan in the FA Cup. 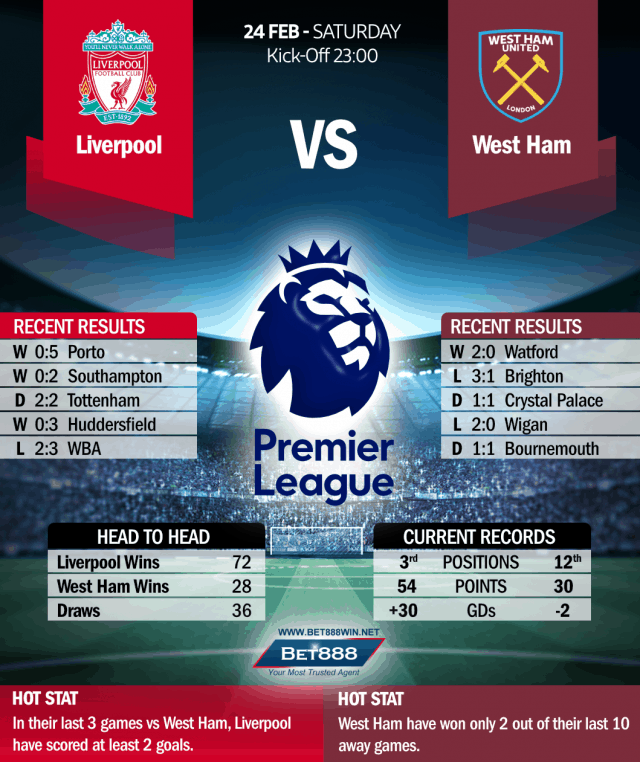