Manchester United have ended Liverpool’s five-game unbeaten Premier League run, but the Reds are looking to return to winning way against Watford. Along with Manchester City, Liverpool are the only team in English top flight who haven’t lost a single home game this season, and with five victories out of previous six EPL matches at Anfield, Jurgen Klopp’s team are hoping to extend their impressive streak. With eight defeats in the last nine away games, including a 1-0 loss to Southampton in the FA Cup, the Hornets are among the weakest visiting sides in the Premier League. Additionally, Watford have only managed to keep a clean sheet once in those nine encounters, which might be their main problem against devastating Liverpool attack that has netted thirteen goals in five games before a 0-0 draw with Porto. In their first meeting this season, they’ve split points in a fantastic 3-3 draw thanks to Britos’ injury-time equalizer.
Klopp has all of his players available for the meeting except for Nathaniel Clyne and the third-choice goalkeeper, Adam Bogdan, as both are yet to recover from long-standing injuries, while Tommie Hoban, Nathaniel Chalobah, Younès Kaboul, and Gerard Deulofeu can’t perform for Javi Gracia’s side also due to injuries. 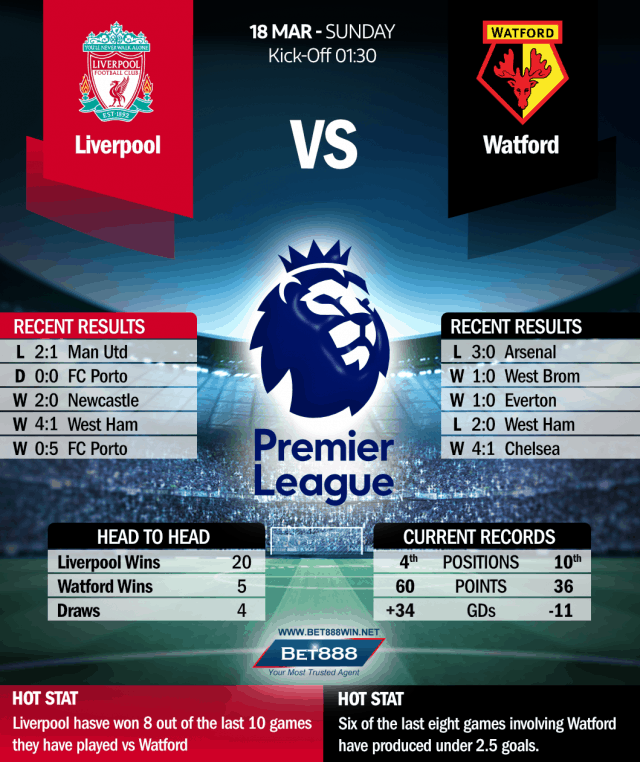