After a 0-0 draw at the San Siro, Lazio will host AC Milan at the Stadio Olimpico in the Coppa Italia semi-final second leg, hoping to reach the final, and probably get a chance to get their revenge on Juventus that have beaten them in the last year’s final. However, the Rossoneri are playing amazing since Gennaro Gattuso replaced Vincenzo Montella at the bench, and they are not willing to give up without a fight. Milan have defeated Roma last weekend with two goals to nil and extended their unbeaten record in 2018 to 10 games, but they need to give their best efforts to endure against a rampant Lazio team that has bagged sixteen goals in last five home encounters. Il Diavolo have secured four victories out of five away matches in the new year, allowing their opponents to score only two times.

Martin Caceres has suffered a knee injury against FCSB in the Europa League, and it is still unclear when he could return to action. Simone Inzaghi has sidelined the experienced goalkeeper Federico Marchetti, who is foreseen to leave the club at the end of the season once his contract expires. Mauricio is in the similar situation as well as Filip Djordjevic, so none of them are expected to be included in the squad for the derby match.

On the other hand, Gattuso still can’t count on the injured Andrea Conti, but he can be m 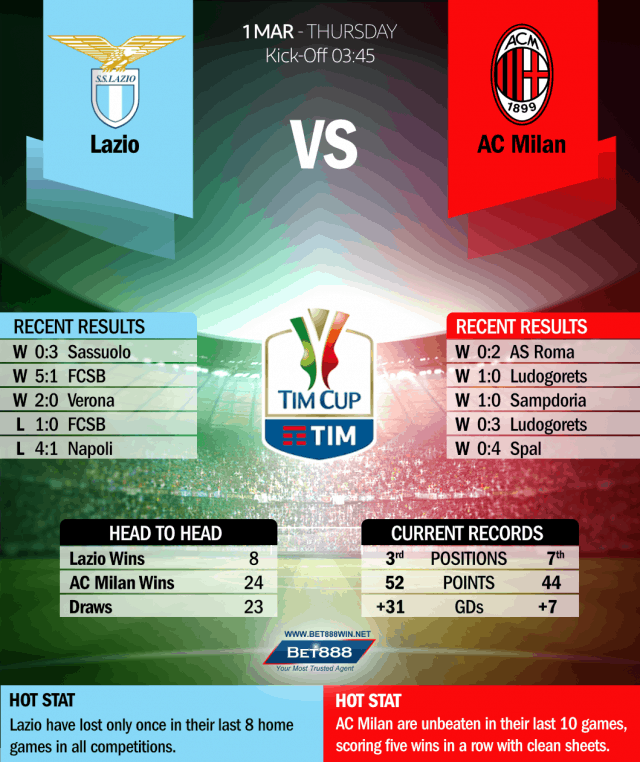