The Italian champions, Juventus, will host Tottenham Hotspur at Allianz Stadium in the first leg of the Champions League knockout stage.
The Old Lady have participated in two Champions League finals over the last three seasons, which is a clear indicator that Massimiliano Allegri’s team know how to play in Europe.

Unlike last seasons, the Bianconeri are experiencing some troubles in Serie A, as Napoli have had a tremendous first half of the season. However, the defending champions have won six out of their last seven home encounters in all competitions without conceding a single goal, and the Harry Kane will have to be at ‘his best’ to get the ball past Gianluigi Buffon.

The Spurs, have failed to win in their last three games away from Wembley, but last weekend’s triumph against the North London rivals, Arsenal, have certainly boosted squads morale. The EPL giants have finished at the top of their group ahead of Real Madrid and Borussia Dortmund, which shows Mauricio Pochettino is doing a great job this year.

Allegri will be denied for the services of Andrea Barzagli, Juan Cuadrado, Benedikt Howedes, and Blaise Matuidi, while the best Juve player, Paulo Dybala, hasn’t managed to recover from a muscle injury, but his return to the field is expected to take place in the second leg.

Best Tottenham defender, Toby Alderweireld, is not on the Pochettino’s list, despite playing the full 90 minutes against Newport last week. 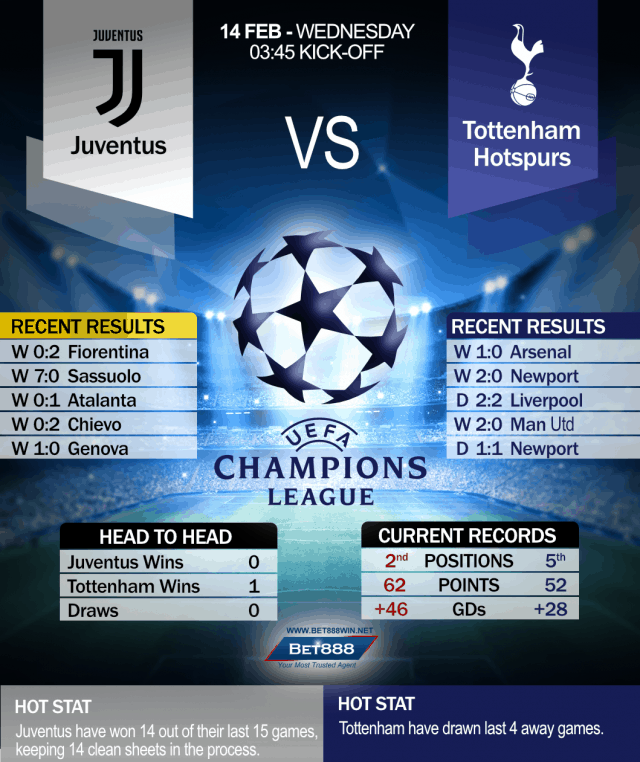