It’s been a terrible two weeks for the once seemingly unbeatable Inter Milan. A 3-1 defeat to Udinese put an end to their unbeaten run in Serie A, and that was swiftly followed by a 0-1 defeat to Sassuolo. And then, elimination to city rivals AC Milan in the Italian Cup.

In fact, since the 5-0 thrashing of Chievo, Luciano Spalletti’s men have scored just one goal in five matches. Defeat to Lazio now would not only distance the Nerazzurri from first place, but it would put their spot in the top four at serious risk.

Meanwhile, Lazio are in a mini slump too, having won just two of their last six games. They still demolished lowly Crotone 4-0 last week and earned an important 1-0 victory against Fiorentina in the Italian Cup on Tuesday.

Get set for an engaging battle between two of the league’s most dynamic strikers, Mauro Icardi and Ciro Immobile, both of them combining for 33 goals.

Inter will be without Danilo D’Ambrosio, who will be replaced by Yuto Nagatomo. On the other hand, a huge blow for Lazio comes in the form of the injured Lucas Leiva, who is expected to miss the game alongside Davide Di Gennaro and Felipe Caicedo. 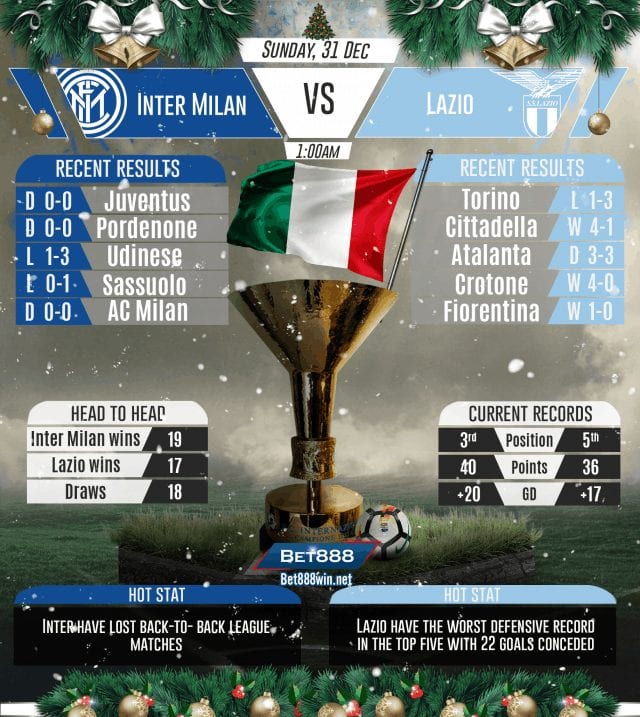