Euro 2008 finalists will meet each other at the Esprit Arena in Dusseldorf as Germany is set to host Spain. Just one of their previous ten head-to-head encounters ended up with a draw while Germany won five and lost four times including maybe the most important game in Vienna, thanks to Fernando Torres, who secured his country first European title after forty years. Both sides were very successful in the World Cup qualification, comfortably securing first places in their respective groups, especially the DFB Eleven, who finished qualifications with maximum ten wins and an impressive +39 goal difference, scoring forty-three goals in the process. The Red Fury has only conceded three goals in ten qualifying encounters while scoring thirty-six times. Spain hasn’t lost a single game since Euro 2016 defeat to Italy, managing to win twelve out of their last sixteen matches. The current world champions are undefeated in twenty-one consecutive games, with their last loss date back to 2016 when France beat them by two goals to nil.
Joachim Low has chosen not to call Mario Gotze, Marco Reus, and Andre Schurrle due to technical reasons, while Manuel Neuer can’t play due to a foot injury. As for the visitors, Morata, Cesc Fabregas, and Pedro are ruled out by the manager, Julen Lopetegui, who decided to give a chance to Diego Costa and Marcos Alonso. 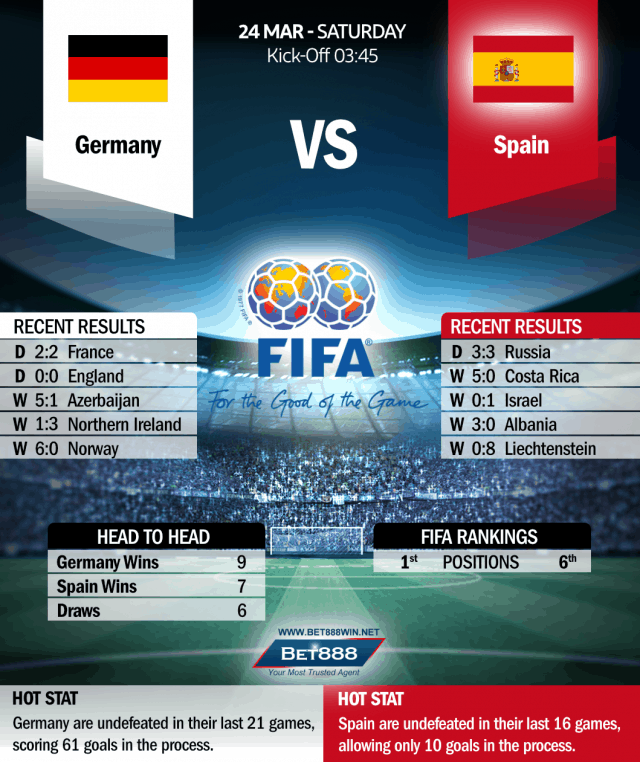