Genoa achieved two massive wins against Lazio and Chievo Verona, and they are set to host Internazionale looking to maintain a good form. After five consecutive draws, the Nerazzurri have finally managed to beat Bologna at Giuseppe Meazza last weekend and boost their hopes of securing the Champions League football for the next season.

However, the Milanese giants have lost the last four meetings at the Stadio Luigi Ferraris, and they are going to put forth their maximum effort to avoid the same scenario. Inter are clearly in crisis, and Davide Ballardini’s team could take advantage of that, as they are trying to escape the danger zone. Last time The Red and Blues scored more than one goal at home was in a 2-3 loss against Napoli back in October.
Armando Izzo and Aleandro Rosi are ruled out, with the former expected to return to action at the end of February. Miguel Veloso is still recovering from a muscle strain, while Giuseppe Rossi had a hamstring injury that will sideline him for at least one month.

Luciano Spalletti has major concerns regarding the condition of Joao Miranda, Ivan Perisic, and team’s best player, Mauro Icardi, all struggling with injuries. The Argentine and the Croatian have trained apart from the rest of the squad, and their appearance is hanging in the balance. 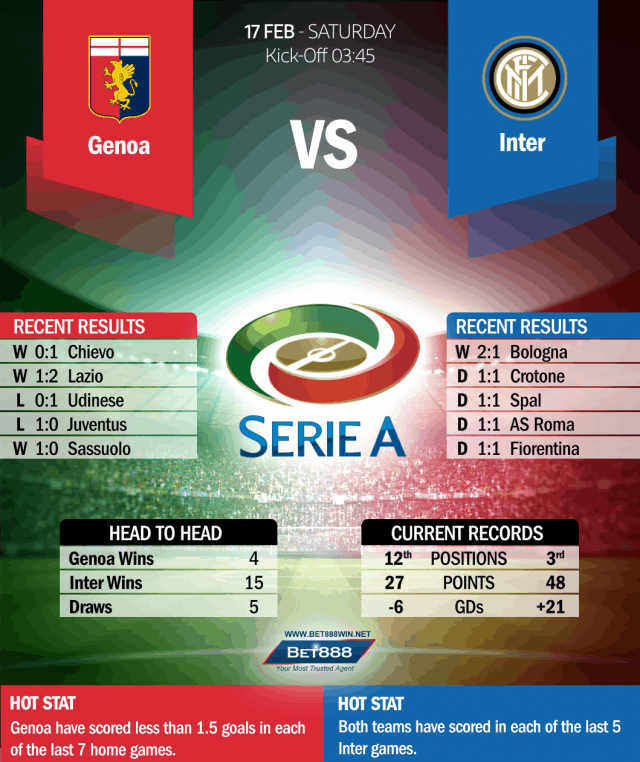