At the Stade de France in Paris, France will face the struggling Colombia side who barely managed to secure their presence in Russia following disastrous last four qualification matches in which they failed to achieve a single victory. The Tri-colours have finished top in their group ahead of Sweden and Holland although they didn’t shine in all games, especially in Stockholm where the Yellow and Blues took all three points thanks to an injury-time goal scored by Ola Toivonen. Both teams have played two friendly matches after the end of qualifications, as France beat Wales 2-0 and drawn 2-2 with Germany, while Colombia lost to South Korea two goals to one and comfortably defeated China with a four-goal margin. However, this will be first ‘real test’ for the Coffee Growers ahead of the World Cup in which Jose Pekerman intends to repeat same success from Brazil where they’ve reached the quarter-finals.
Didier Deschamps has once again left Karim Benzema out of the squad and instead called Anthony Martial. Presnel Kimpembe took Aymeric Laporte’s place in the team, while Wissam Ben Yedder earned his first spot in the attack following fantastic performances with Sevilla. As for the visitors, James Rodriguez and Radamel Falcao have found themselves back on the list after minor injury problems. 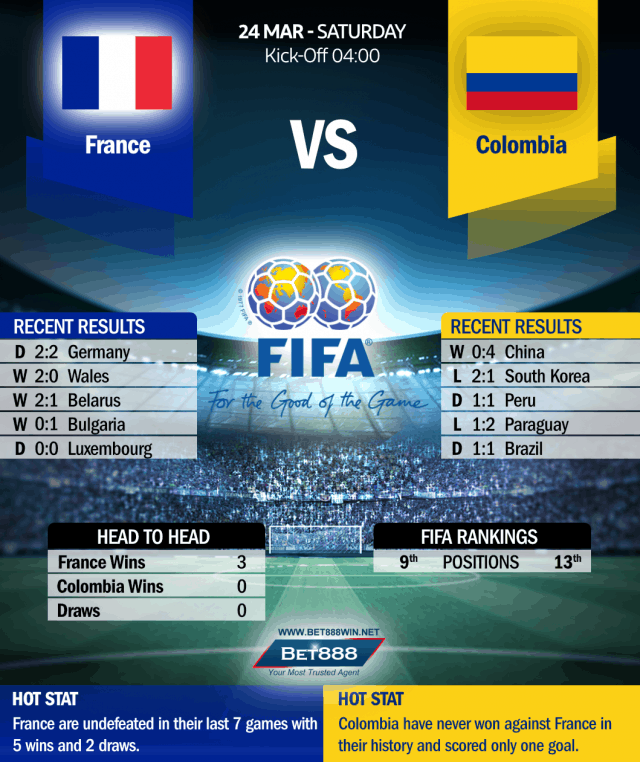