After four consecutive league victories, the undisputable Premier Leauge leaders, Manchester City, will travel to the Goodison Park to face Everton, the only team who managed to avoid defeat at the Etihad Stadium this season. The Toffies have achieved two wins in a row, against Brighton and Stoke City, following two straight losses to Burnley and Watford, but they have no chance of reaching the European football next season whatsoever. Huge summer investments haven’t paid off under Ronald Koeman, and Sam Allardyce didn’t bring desirable improvements, as Everton still has negative goal difference, which is disappointing, considering they’ve spent £142 last summer. The Citizens have had a tremendous season so far, as they’ve collected 81 points in 30 league games, and virtually secured the title few months before the end of the season. Pep Guardiola’s team had a minor crisis at the beginning of 2018, but they’ve managed to step up their game and record two away victories in a row, against Arsenal and Stoke, firming their place at the top of the table.

Maarten Stekelenburg, Eliaquim Mangala, James McCarthy, and Gylfi Sigurdsson are sidelined by injuries in the home side, while Benjamin Mendy, Fabian Delph, and Sergio Aguero won’t be able to perform for the visitors. 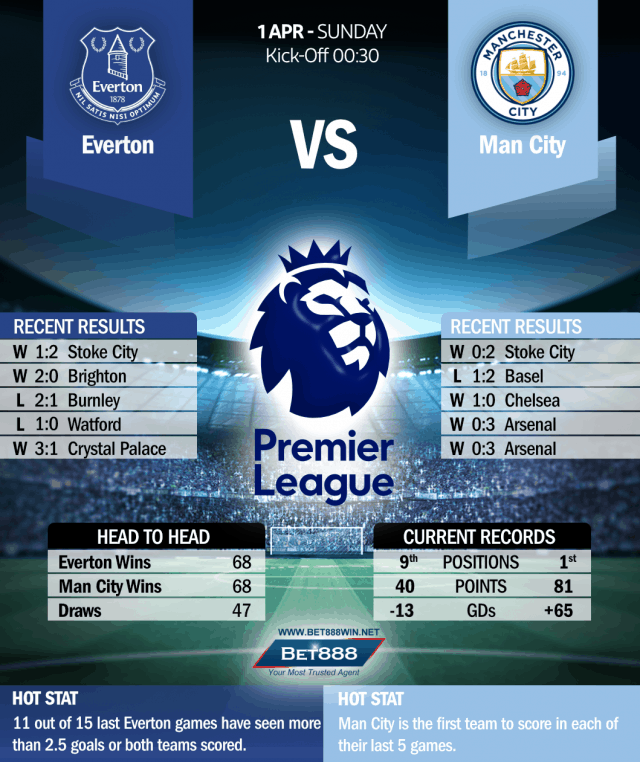