The 231st Merseyside derby will take place at the Goodison Park where Everton will be facing Liverpool. This is a season the Toffies want to forget as soon as possible, as they’ll stay out of the European football for another year despite high investments during the summer. Everton have won two out of their previous five Premier League games while losing three times; only last week Manchester City demolished them by three goals to one adding another minus to their miserable -15 goal difference. Liverpool, on the other hand, are comfortably sitting in the third place with the Champions League football in their hands, and after outplaying the Citizens, 3-0, the Reds will be facing their city rivals in a great atmosphere. Jurgen Klopp’s side have five victories in the last six EPL matches including a last weekend’s win over Crystal Palace on the road following a remarkable comeback from a goal down.

The home team is decimated by injuries suffered by Eliaquim Mangala, Eliaquim Mangala, James McCarthy, Maarten Stekelenburg, and club’s best player, Gylfi Sigurdsson, while Idrissa Gueye might be fit for the encounter after picking up a minor thigh injury. Adam Lallana, Joel Matip, Benjamin Woodburn, Emre Can, Joe Gomez, and Ragnar Klavan are ruled out in the visiting squad, but Klopp’s main concern is a groin injury sustained by Mohamed Salah during the midweek’s game against Manchester City. 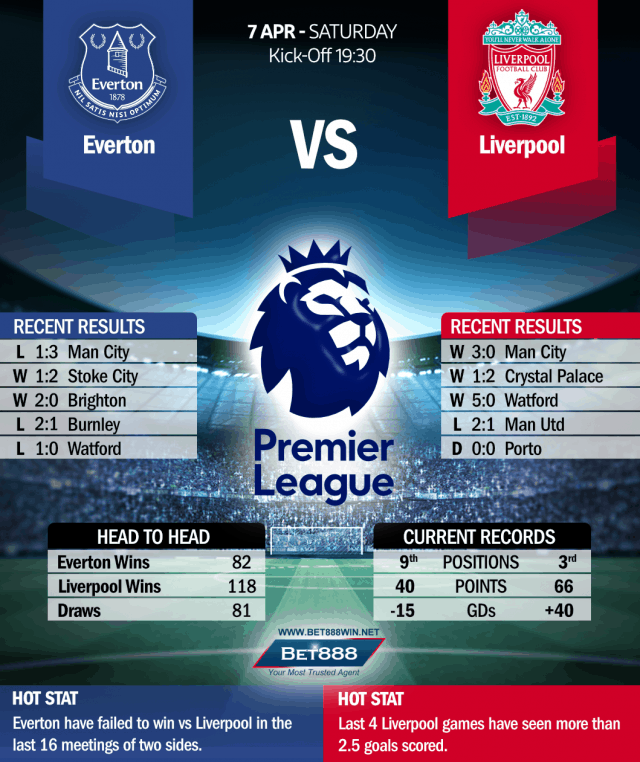