ngland will host Italy at the Wembley Stadium in London following a narrow 1-0 victory over Holland last weekend thanks to Jesse Lingard’s goal. After securing their appearance in Russia, the Three Lions have played three friendly games, against Brazil, Germany, and most recently, against the Netherlands, scoring only once in those three matches and not conceding a goal. However, Gareth Southgate would like to improve his team’s offensive efficiency especially considering the fact they have one of the most prolific strikers in the world, Harry Kane. On the other hand, the Blues are going through a rough period. Not only Italy failed to qualify for the World Cup, but they have also lost team spirit, something they’ve demonstrated in a 2-0 loss against Argentina, in a game in which they’ve failed to create a single goalscoring opportunity. Both sides are struggling in the attack. England have scored just three goals in their previous five matches, and all of them have ended with less than two goals, while Italy netted twice in the last five encounters.
Joe Gomez has suffered an ankle injury and won’t be available for the home team, while Ashley Young might take Danny Rose’s place on the left flank. Jack Wilshere will also skip the game due to a minor knee issue. Luigi Di Biagio is thinking about Gianluigi Donnarumma as a first-choice goalkeeper ahead of Buffon and fielding Antonio Candreva instead of Federico Chiesa. 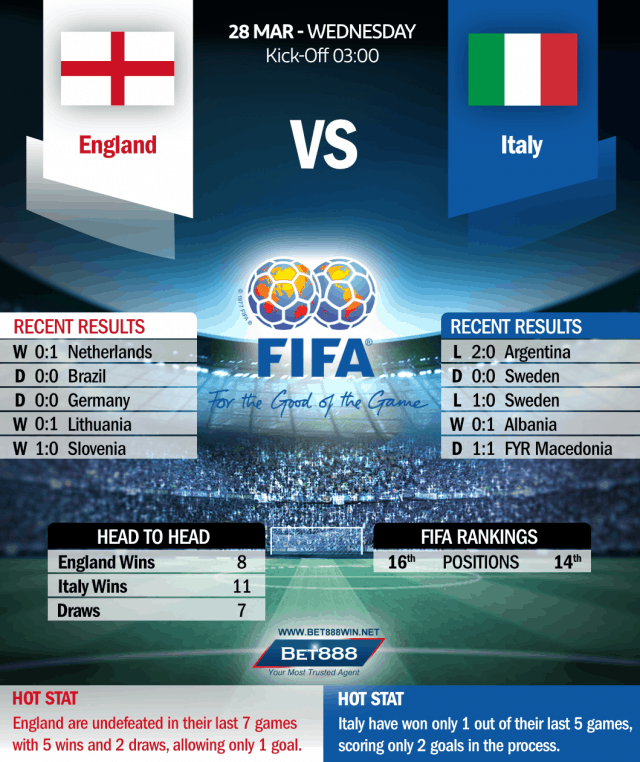