Despite a negative goal difference, Eibar are currently occupying the seventh place in La Liga, and after two wins in a row, they are set to face the undefeated league leaders, Barcelona, at the Ipurua Municipal Stadium.

Although the Gunsmiths’ prime objective was to avoid relegation, their impressive performances this season give them every right to hope for the Europa League qualification spot. Eibar have scored twelve goals in their last five home matches, while Blaugrana managed to keep a clean sheet in three out of their last five road games. The Catalan giants have almost secured the title, as they have seven points lead over Atletico Madrid, and seventeen over the arch-rivals Real Madrid.
Jose Luis Mendilibar will miss on a couple of key first-team players, as Pedro Leon and Fran Rico are both sidelined due to injuries, while Sergi Enrich and the January signing, Vukasin Jovanovic, will likely watch the game from the stands.

Apparently, never-ending injury issues of Thomas Vermaelen continue, as the Belgium international is again experiencing muscle problems. Sergi Samper and Ousmane Dembele’s participation is questionable, but Valverde will most probably leave the Frenchman out of the team to prepare him for the Champions League clash with Chelsea. 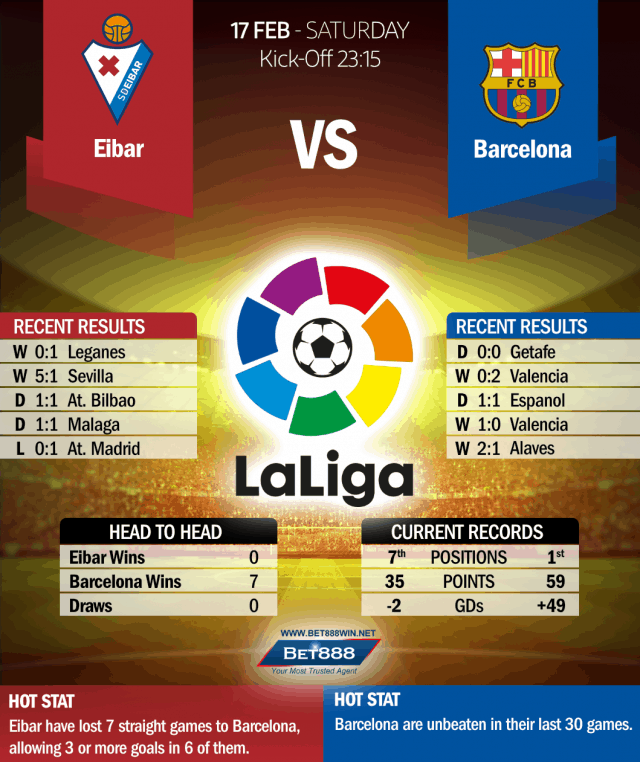