The final game of Matchday 24 sees second-placed Dortmund welcoming 10th-placed Augsburg. While Augsburg have had over a week to prepare for this match, Dortmund played in the Europa League (making the last 16) last Thursday. BVB (Dortmund) are back on track under manager Peter Stöger and have won the last three games and are eight unbeaten in the league. On the other hand, Augsburg have become a little unsteady and have lost their last two Bundesliga games. This is the first time this season that Augsburg have not collected at least one point for two games in a row.

Dortmund will be without the services of Andriy Yarmolenko (foot injury) and Jadon Sancho (ankle injury) as they face Ausburg. There are also questions about the fitness of Erik Durm, Raphael Guerreiro, Shinji Kagawa, Maximilian Philipp and Sebastian Rode which are also sporting injuries. On the other hand, Daniel Baier is missing this game for Ausburg due to yellow-card-ban, Alfred Finnbogason is sporting a calf injury and Jeffrey Gouweleuww is still not fit due to a knee injury. Fabian Giefe, Daniel Opare and Marco Richter are also questionable for the game.

The game is a must-win for Dortmund as they are trying to hold onto their Champions League spot in Bundesliga. On the other hand, Ausburg are trying to get back on track and end the recent bad form. All the prerequisites for a great match have been met at Signal Iduna Park. 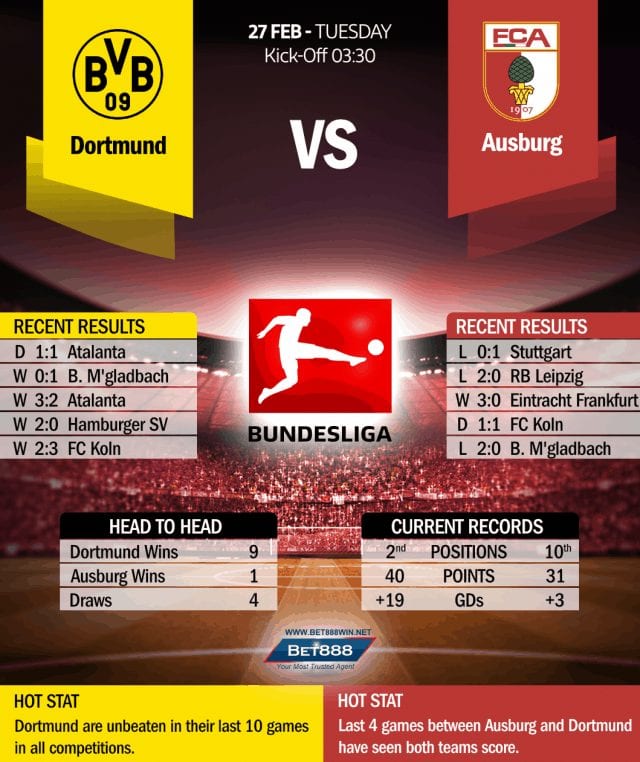