After an unconvincing 1-0 victory over Panama last weekend, Denmark will host Chile at the Aalborg Portland Park. The Red-White have secured their fifth World Cup appearance through a playoff, while Chile failed to qualify despite being one of the best selections in South America thanks to a dreadful run of form in the final four games. Denmark have proved to be very tough at home soil, considering the fact they’ve only lost once in their previous ten home games, mainly thanks to impressive defensive performances. The European side has only conceded nine goals in qualifications, including one against the Republic of Ireland in a 5-1 victory in the playoff. Although the Red One will not travel to Russia, they still possess tremendous quality within their ranks and with the likes of Alexis Sanchez, Arturo Vidal, and Eduardo Vargas, Chile can give Åge Hareide’s team a hard time. Reinaldo Rueda’s side has already beaten one Scandinavian country last weekend, as Marcos Bolados’ late goal made the difference in a 2-1 victory over Sweden.

Andreas Bjelland, Jannik Vestergaard, and Kasper Dolberg are all sidelined with injuries, but the Premier League stars, Kasper Schmeichel and Christian Eriksen should start from the first minute. Valber Huerta, Mora Aliaga, and Brayan Cortes might make their debut with Chile after staying on the bench against Sweden 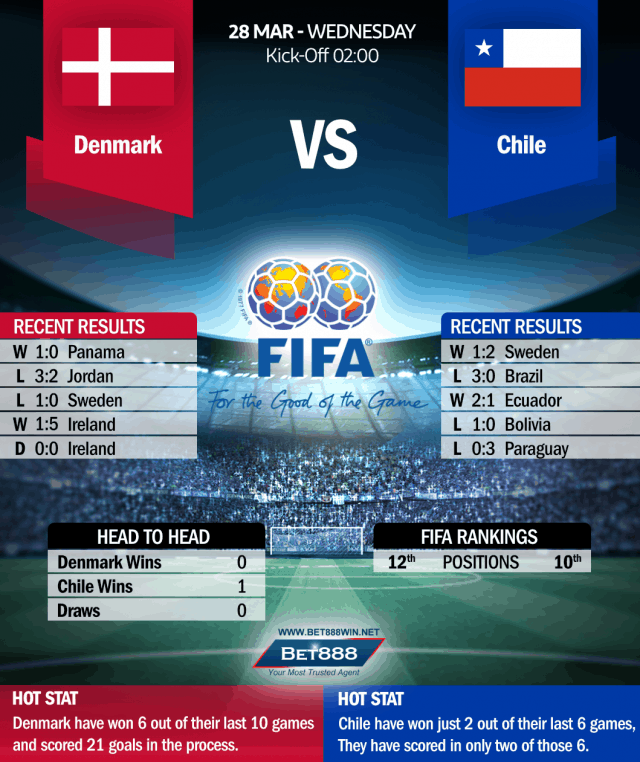