After a 2-1 win over Crystal Palace, Chelsea will be hosting Tottenham Hotspur looking for a victory, as this might be their last chance to close the gap on their city rivals and return to the Champions League promotion race. The Blues have had a terrible start of the second half of the season, and they seem yet to find a desirable form, as they’ve lost three out of last five Premier League games, including a miserable 4-1 defeat to Watford. However, Antonio Conte is determined to drag his team to the most prestigious club competition in Europe following a 3-0 loss to Barcelona which saw Chelsea out of this year’s Champions League campaign. The Spurs, on the other hand, are having a tremendous season in the national championship, as their last defeat dates back to December when Manchester City run them over by four goals to nil, and losing the Champions League promotion spot would be a disaster considering how good they were this whole season.

David Luiz is yet to recover from an ankle injury, while Andreas Christensen and Thibaut Courtois are experiencing minor thigh problems and their appearance still hangs in the balance. Harry Winks has picked up a leg injury and won’t be at Pochettino’s disposal, but Harry Kane’s ankle issue sees the visitors considerably weakened ahead of the big showdown. 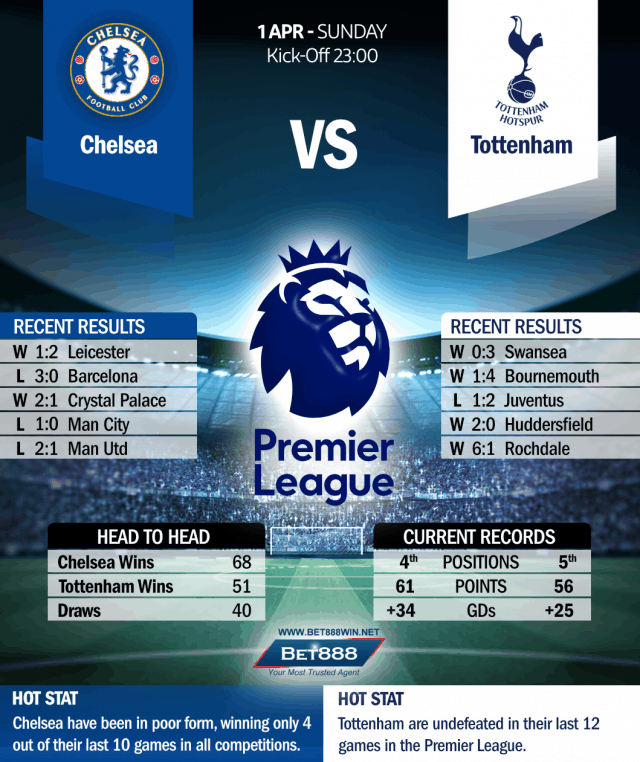