Owing to a turbulent season in the Premier League, Chelsea are eager to impress against the Spanish giants, Barcelona, in the first leg of the Champions League knockout stage.
The English team has had an unpromising start of the New Year, with two losses in a row, in which they’ve conceded seven goals. However, after two consecutive victories, they are looking to surprise Blaugrana that are not playing their best game although they are collecting points in La Liga. The Catalan heavyweights have scored ten goals in their last four road games, while the Blues netted twelve at Stamford Bridge in the previous five matches. It will be a high-stakes game, and both clubs are desperate to make a positive result, but Antonio Conte is under pressure, and Ernesto Valverde is in position to take advantage of the situation.

Chelsea boss will be denied for the services of David Luiz, Ross Barkley, and Tiemoue Bakayoko, all struggling with injuries. But, Marcos Alonso could be ready for the matchday after suffering from muscle fatigue.

Thomas Vermaelen’s muscle problems will prevent him from participating in the game, while Barca’s outcast, Andre Gomes, has sustained a slight injury that will further sideline him from the field. Paco Alcacer and Denis Suarez are in doubt, as both of them have been training apart from the rest of the squad over the last couple of days. Valverde can’t count on the new arrival, Philippe Coutinho, but Ousmane Dembele has returned to full fitness, and he is expected to take his place in the attack alongside Messi and Luis Suarez. 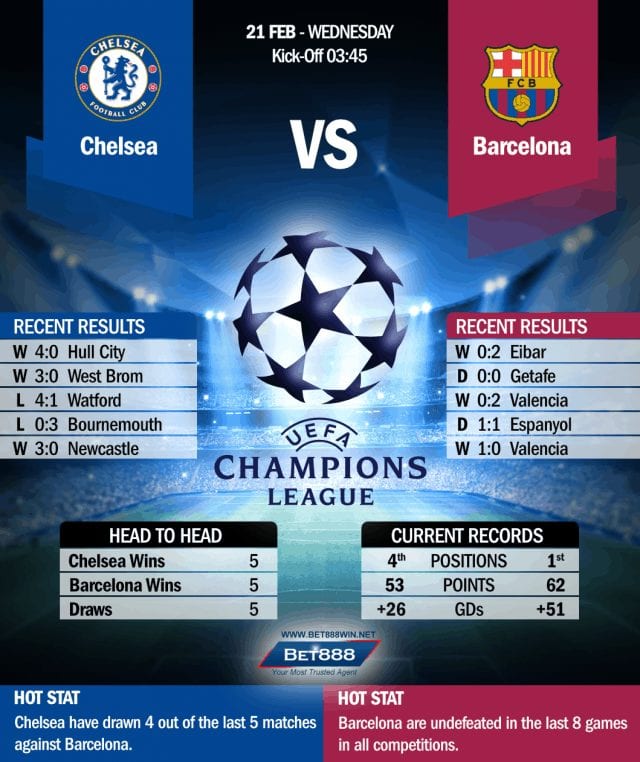