Man City’s relentless pursuit of an unique quadruple continues with this trip to Cardiff in the fourth round of the FA Cup.
Pep Guardiola’s men edged Bristol City 5-3 on aggregate in midweek to advance to the Carabao Cup final. They are running away with the EPL title and are also in the last 16 of the Champions League.
City sailed into the fourth round of the FA Cup following a 4-1 home win over Premier League side Burnley, with goals from Leroy Sane, Bernardo Silva and two from Sergio Aguero.
While Cardiff secured their place in the next stage of the competition after also sealing a 4-1 victory over Mansfield in the third round replays.
City last met Cardiff in 2014, a EPL match at the Etihad Stadium which the Citizens won 4-2. Edin Dzeko, Jesus Navas, Yaya Toure and Sergio Aguero were the scorers that day.
Fabian Delph, Phil Foden, Gabriel Jesus and Benjamin Mendy remain sidelined for City. For Cardiff, they have to work around a growing injury list that consists of Lee Peltier, Matt Connolly, Aron Gunnarsson, Craig Bryson and Danny Ward. 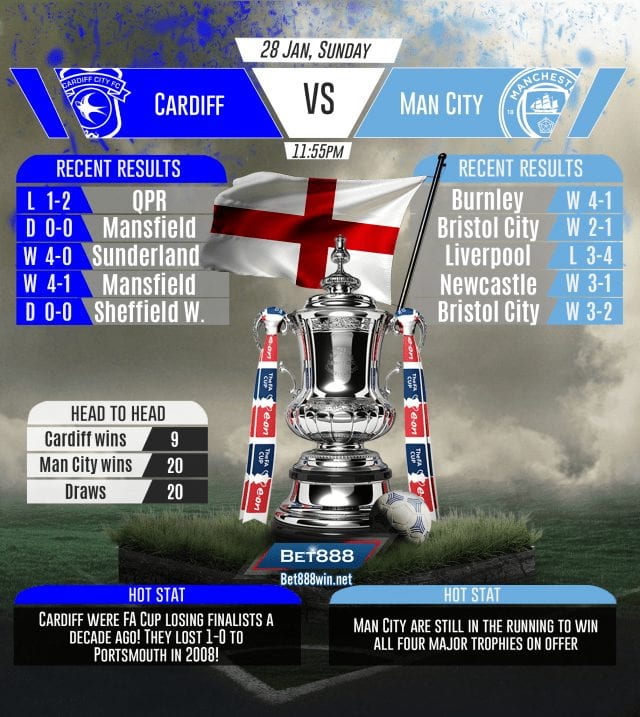