Besiktas will play for pride in their Champions League last-16 second-leg tie at Vodafone Park following a disastrous 5-0 defeat to the Bundesliga giants Bayer Munich at the Allianz Arena. After Domagoj Vida picked up a red card, the Turkish side was forced to sit back and defend which ended up in a worst possible scenario for them. However, the Black Eagles showed they know how to play on the counter-attacks and create chances, but Vagner Love and Talisca have missed a couple of sitters to put the ball in the back of the net. Besiktas’ last home loss was against Konyaspor back in August, and they are hopeful of extending their unbeaten home run to 24 games, but the Bavarians are on 8-game winning streak away from Munich, in which they’ve only conceded two goals, so Senol Gunes’ squad will have to be at their best to get a positive outcome out of this one.

Vida is suspended for the home side, while Pepe suffered a toe injury and won’t be available for the match. Veli Kavlak and Atinc Nukan are still in doubt after picking up injuries on the training ground. Corentin Tolisso and Kingsley Coman are left out of the team due to injuries. The same goes for Manuel Neuer who may miss the upcoming World Cup with a metatarsal fracture. 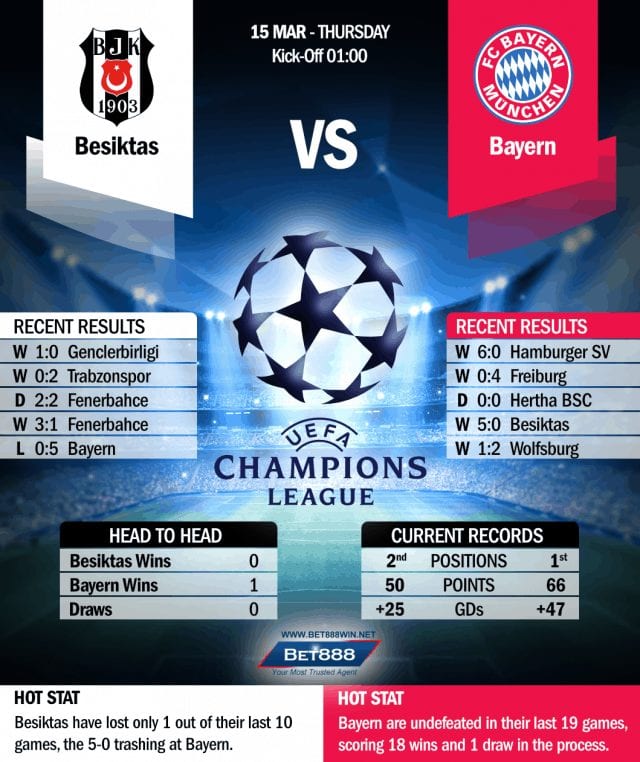