The undisputed Bundesliga leaders Bayer Munich will host Schalke 04 at Allianz Arena in a derby match this weekend following a routine 2-0 victory against Mainz.
The Bavarians are undefeated at home this season in all competitions. Having won 11 games in a row, they are the hardest team to beat in Germany.

Schalke have had a decent first half of the season, but things have changed in 2018, as the Miners managed to win only one of their last four Bundesliga matches.
And, after a nasty 2-1 home loss to Werder Bremen, Domenico Tedesco looks to bolster squad’s morale ahead of the Saturday’s game. With rather weak recent performances, the Royal Blues seems to don’t stand a chance against the Reds.

Thiago Alcantara and Javi Martinez won’t be available due to injuries, and Manuel Neuer’s return is still far away, while Arturo Vidal may recover from illness. However, Jupp Heynckes has exceptional players at his disposal, as Corentin Tolisso and James Rodriguez are back to their full fitness after some fatigue problems.

The talented youngster, Weston McKennie, is ruled out because of a knee injury, as well as Baba Rahman who extended his loan deal from Chelsea. Sascha Riether and Pablo Insua are also unable, so a notably weakened Schalke are going to face the German champions 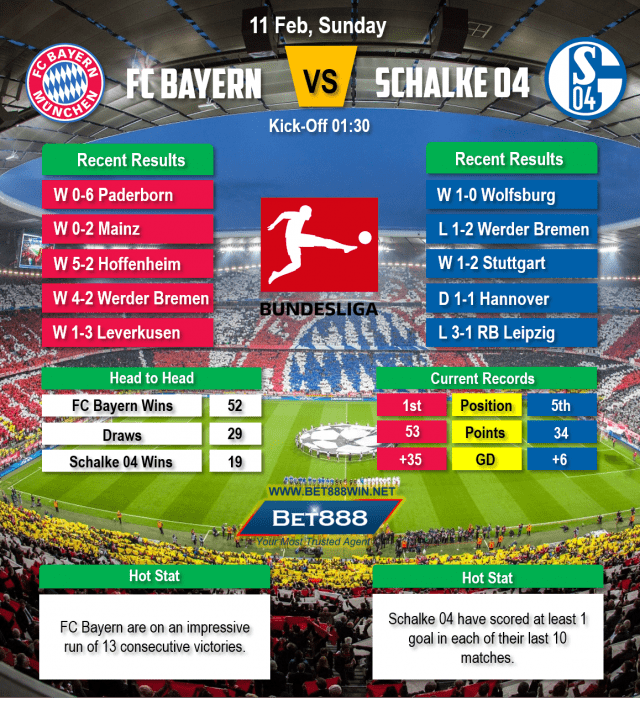