Atletico Madrid still have a minimal chance to overtake Barcelona at the top of La Liga table as they are currently nine points behind the Catalan heavyweights, but Diego Simeone looks to bring a European trophy to the home fans, and a game against Sporting Lisbon, at the Wanda Metropolitano Stadium, will be the first obstacle on that road. Los Colchoneros had no problems against Lokomotiv Moscow, as they’ve easily gone past the Russian side by beating them twice, 8-1 in aggregate. Sporting, on the other hand, experienced all kind of troubles against Victoria Plzen, whom they’ve barely eliminated after extra time. The Portuguese team have three wins out of five previous games in all competitions, but last weekend’s defeat to Braga practically left them out of the title race in the national championship. Therefore, the Lions have to battle their way to the Champions League through the Europa League, which puts them under a great deal of pressure, especially considering the fact they must beat one of the best teams in Europe.

The hosts are decimated by injuries suffered by Filipe Luiz, Sime Vrsaljko, Juanfran, and Gonzalez, while Simeone should be happy to see Antoine Griezmann back to full training after minor thigh problems. As for the visitors, Daniel Podence is out with a foot injury, while the appearance of William Carvalho, Seydou Doumbia, and Bruno Cesar still hangs in the balance. 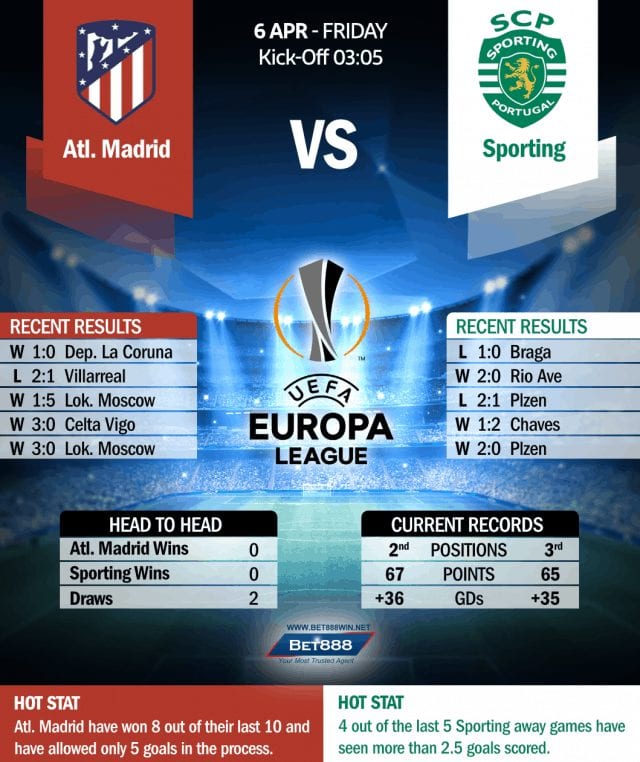