Arsenal’s disappointing 3-game losing streak was ended against Watford before the international break, and the Gunners will be hosting a troubling Stoke City side who failed to win in seven consecutive Premier League games. The Potters last EPL victory dates back to January when they’ve beaten Huddersfield by two goals to nil, and since then they’ve lost 3 and drew in 4 matches, which diminished their chances to avoid relegation. With three points behind the safe zone, Stoke desperately need a positive result against the North London team to keep up the pace with West Ham, Southampton, and Crystal Palace. Thanks to many ups and downs, Arsenal will probably be missing on the Champions League for the second year in a row, as they currently have thirteen points less than Tottenham, so they will have to settle with another Europa League campaign. Arsene Wenger’s team has won three out of last five home matches, losing only to Manchester City, while Stoke achieved one away victory this term and lost nine times.

Alexandre Lacazette and Santi Cazorla are unavailable for the home side, while Aaron Ramsey might be fit for the encounter. Paul Lambert doesn’t have Geoff Cameron, Maxim Choupo-Moting, Lee Grant, and Stephen Ireland at his disposal, as all are struggling with injuries. 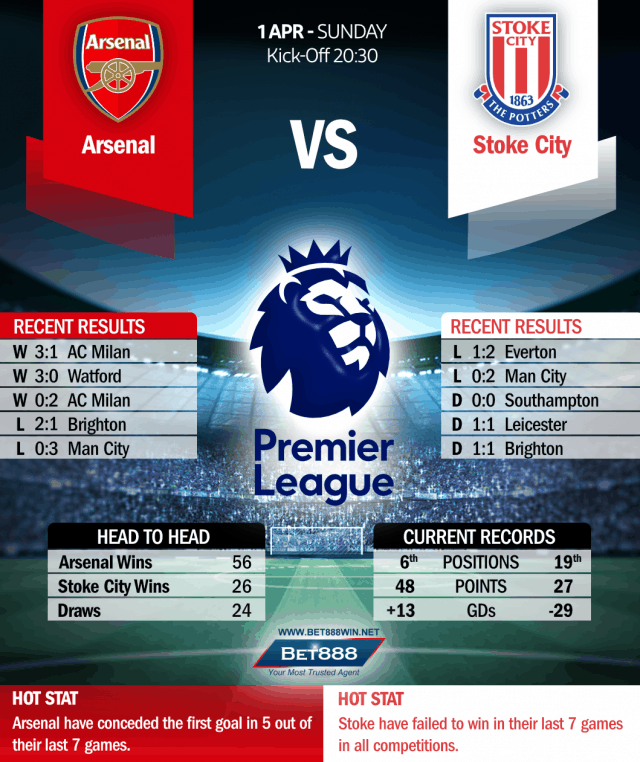