Manchester City have demolished Arsenal in the Carabao Cup final, and they will now travel to London hoping to repeat the same scenario, this time in the Premier League. The Citizens came very close to winning the EPL title, as they have thirteen points lead over their city rivals, Manchester United, while the Gunners are desperate to secure the Champions League promotion spot and return to the elite European competition after a one-year break. However, considering their recent form, Arsene Wenger’s team doesn’t have many chances against the best English side. Arsenal have lost four out of their last six games in all competition, including a miserable defeat at the Emirates against the low-quality Swedish outlet, Ostersunds. Manchester City also experienced a little drop in form, failing to win none of their last three road games in the Premier League.

Alexandre Lacazette has suffered a knee injury and won’t be able to participate in the game. Nacho Monreal and Santi Cazorla are also expected to skip the Friday’s derby.
Benjamin Mendy should return to action only at the end of the season, and Pep Guardiola can’t count on the suspended Fabian Delph and the Brazilian midfielder, Fernandinho, who is struggling with a thigh injury. 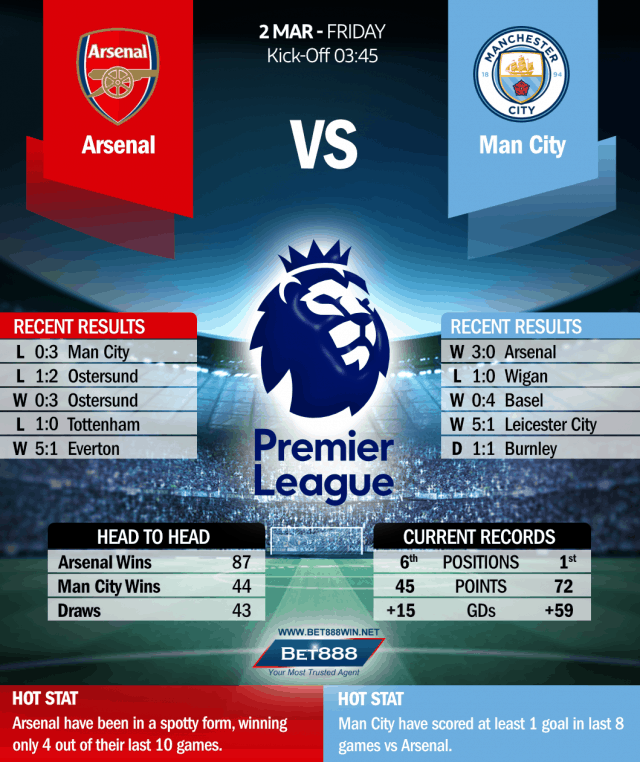