It is crunch time for Arsenal, who are fast disappearing out of sight. A poor 2-1 loss at Bournemouth last weekend left them 8 points out of the top-four zone.
The sale of Theo Walcott to Everton has also deepen the woes of the Gunners fans – and guess what, Alexis Sanchez is also seemingly headed to Manchester United! The deal is nearing completion at the time of writing.
Arsenal won the reverse fixture, a 3-2 thriller last month, and will be glad that they have never failed to score in 17 home league matches against Palace. They scored 39 goals in total, at an average of 2.3 a match.
The Gunners, it has to be noted, have scored in each of their last 25 home EPL matches, their longest run since November 2008.
Palace are unbeaten in their last five EPL matches on the road, not a bad record considering they lost all eight prior to that!
After serving his three-match touchline ban, Arsene Wenger will be back in the dugout for the clash at Emirates Stadium.
Mesut Ozil could be back in contention for the match against Palace, but Olivier Giroud is still a week from returning amid speculation that he could be used as a makeweight in the potential deal for Borussia Dortmund striker Pierre-Emerick Aubameyang.

Wenger has doubts over Ainsley Maitland-Niles, who is suffering with flu, while Laurent Koscielny and Nacho Monreal return to the squad following their short-term injury lay-offs.

Roy Hodgson, who has never won an away EPL London derby (D3, L7) is without long-term injured defenders Mamadou Sakho and Scott Dann. 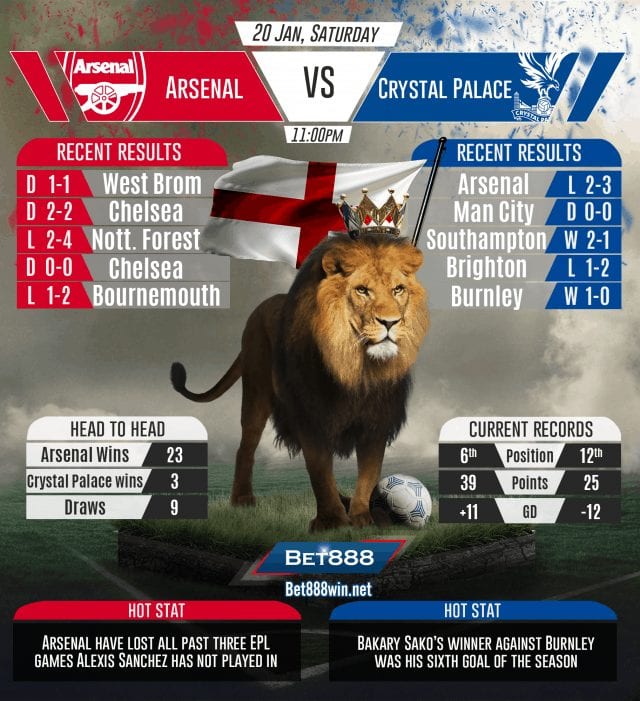