AC Milan will be facing FC Internazionale at the San Siro looking for a victory, as they are desperate to return to the European top-flight. This is possibly the last chance for The Rossoneri to close the gap on their arch-rivals and keep their hopes of capturing the Champions League football alive. Last weekend’s defeat against Juventus was Milan’s first in Serie A in 2018, but despite that, Gennaro Gattuso’s side is still very much in the Champions League race. The Nerazzurri have found their way out of the crisis they’ve been going through with three victories in the previous four games, including last Saturday’s win over Hellas Verona 3-0 at home. Luciano Spalletti’s team have just one point lead over Lazio and a potential loss in the derby match could reduce their chances of securing the Champions League spot. Two sides have faced each other in the Coppa Italia when Milan beat Inter thanks to Patrick Cutrone’s goal in the extra-time, while Inter got three points in their first encounter in Serie A this season.

Gattuso doesn’t have Ignazio Abate and Andrea Conti at his disposal as both are dealing with injuries. Andrea Ranocchia is the only injured player in the ‘visiting’ squad. 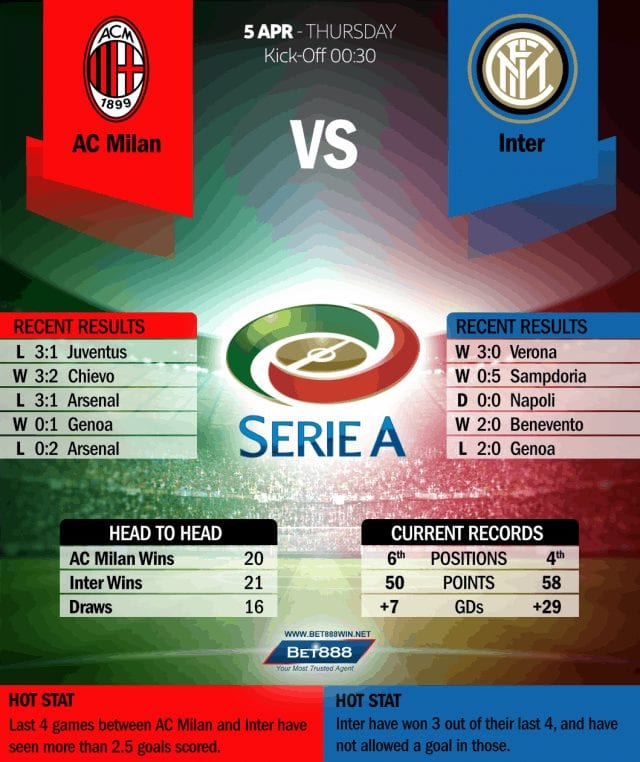