After two consecutive losses to Bayern Munich and Werder Bremen, Schalke are set to host TSG Hoffenheim in Gelsenkirchen. The visitors have been struggling since New Year, but they are hoping to raise their form following a 4-2 win over Mainz last weekend. The Miners have bagged at least one goal in their last eight home games. Also, they are looking to maintain the tradition against Hoffenheim, as they have scored in their last seven head-to-head meetings at the Veltins-Arena.

Domenico Tedesco’s team is currently residing in the sixth place with only two points behind Frankfurt, and this could be a pivotal match in their race for the Champions League spot. However, Die Kraichgauer won’t give up either, as they are trying to close the gap on Bayer Leverkusen and secure the European football too.
Yevhen Konoplyanka and Amine Harit’s appearances are in doubt because of illness. Baba Rahman, Pablo Insua, and Sascha Riether’s injuries, and Max Meyer’s suspension are causing Tedesco a massive headache.

Julian Nagelsmann is forced to leave Lukas Rupp and Kerem Demirbay out of the squad, as both are suffering from injuries, while Nico Schulz should be ready for the matchday after picking up a minor muscle complain. 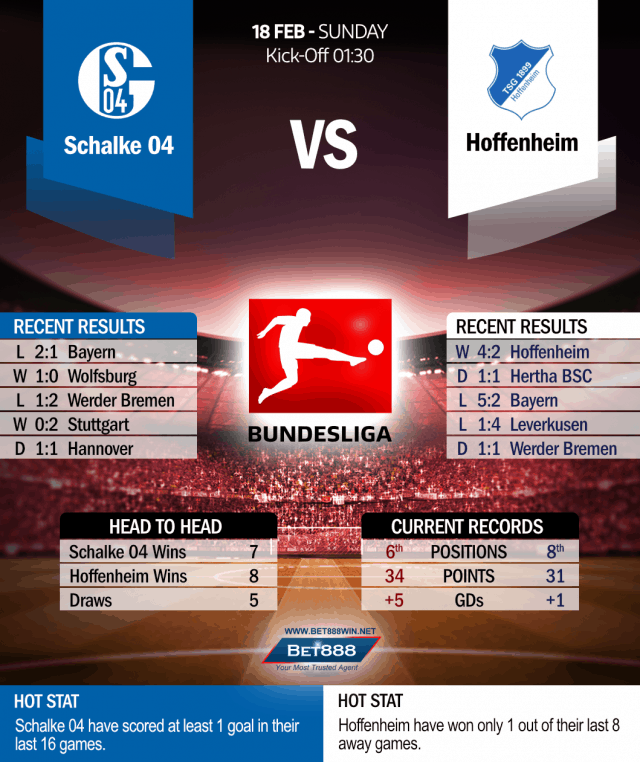